The job gain of 194,000 reported for September was well below what most of us had expected, but the overall picture was considerably brighter than this figure suggests. First, the main factor depressing job growth in the month was a loss of 161,000 jobs in state and local education. That one has me and others scratching our heads. Most schools are back to in-class instruction, but employment in public education is still 431,000 below the levels of September of 2019, a decline of 4.8 percent. (I’m using the last pre-pandemic September to remove problems of seasonal adjustment.) If the September job numbers are accurate, schools are serving their students with fewer teachers and support staff on payroll.

Anyhow, the private sector created a respectable 317,000 jobs last month. If, instead of losing jobs, the public sector had created something like 100,000 jobs, as many of us had expected, then we would have seen September job growth of 417,000, well in line with most expectations. (There was also a large upward revision to the August data.)  So, if there was a job growth failure, it was mostly on the public side. It’s also worth noting the 0.4 percentage point drop in the unemployment rate to 4.8 percent. This is a level we didn’t reach after the Great Recession until January of 2016.

Okay, but let’s get to the Biden versus Trump comparison. As I always say, this comparison is silly, since so many factors affect job growth that are beyond the president’s control. But, everyone knows that if the situation were reversed, Donald  Trump and his crew would be touting the comparison in every forum they had.  So, for the Trump crew, it now stands that Biden has created 4,797,000 jobs in his first eight months in office, compared to a loss of 2,876,000  jobs in the four years of Donald  Trump’s presidency. 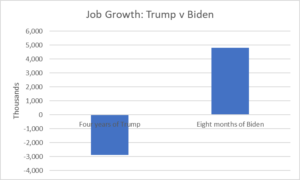