Workers in Frontline Industries in Chicago and Illinois

This analysis was originally prepared for a discussion convened by the Institute for Work and the Economy, based in Chicago. Members of the Cook County Commission on Social Innovation, leaders of Chicago-area community based organizations, the head of the Chicago-Cook Workforce Partnership, local government representatives, and others were invited to and participated in the conversation.

CEPR previously released a report profiling workers in frontline industries. Workers in these industries have always been essential to our economy, and the pandemic has drawn attention to the vulnerabilities these workers face at work. The six broad industries we define as frontline include: Grocery, Convenience, and Drug Stores; Public Transit; Trucking, Warehouse, and Postal Service; Building Cleaning Services; Health Care; and, Child Care and Social Services (see our previous report for methodology). At the national level, we showed that workers in frontline industries are disproportionately women, live in low-income families, and are overrepresented by workers of color. 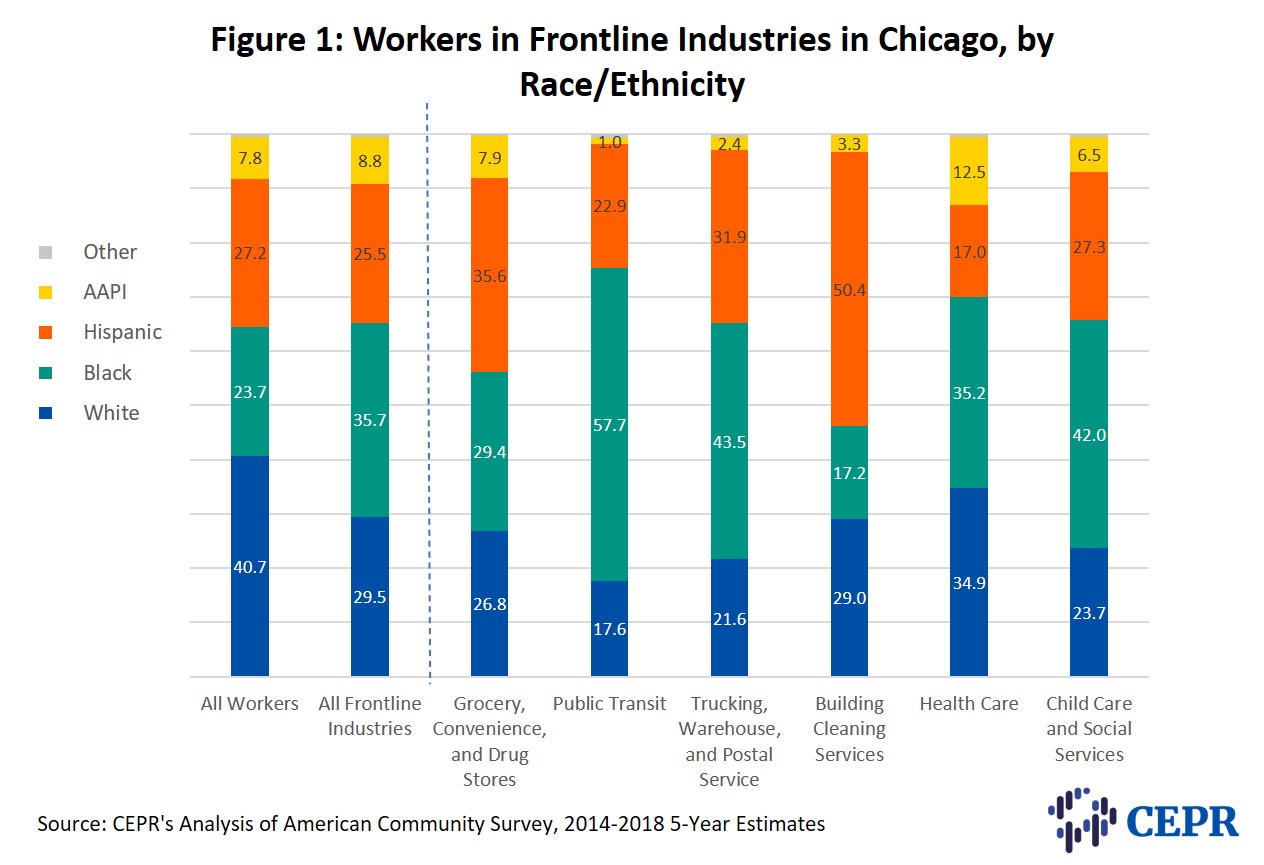 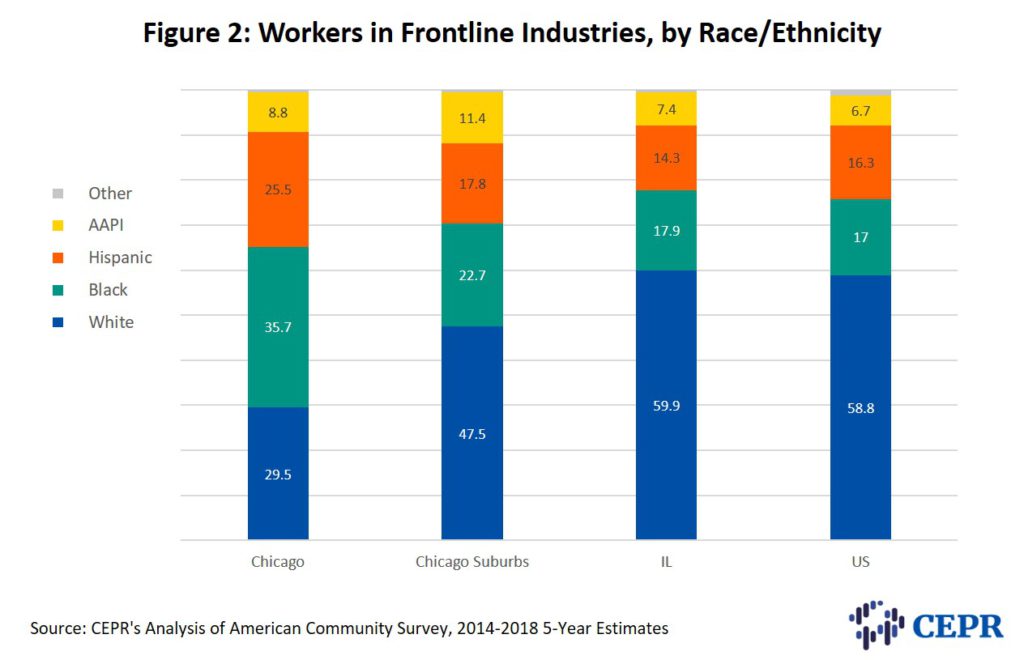 Immigrants make up a substantial portion of frontline workers in Chicago’s suburbs (30.3 percent), more than in the city of Chicago (24.7 percent), and in the US as a whole (17.3 percent).  Figure 3 shows that some frontline industries employ more immigrants than others — for example, close to two-thirds of workers in Building Cleaning Services in both Chicago and its suburbs are immigrants (63.6 percent and 67.1 percent, respectively), and about a third of workers in Trucking, Warehouse, and Postal Service are immigrants (32.3 percent and 36.0 percent, respectively). 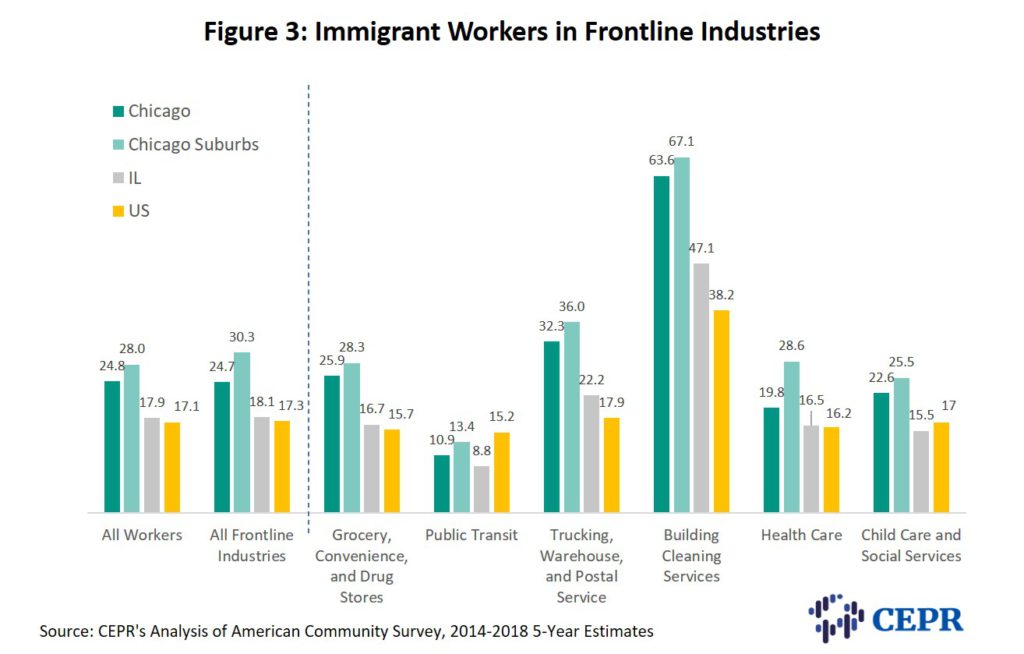 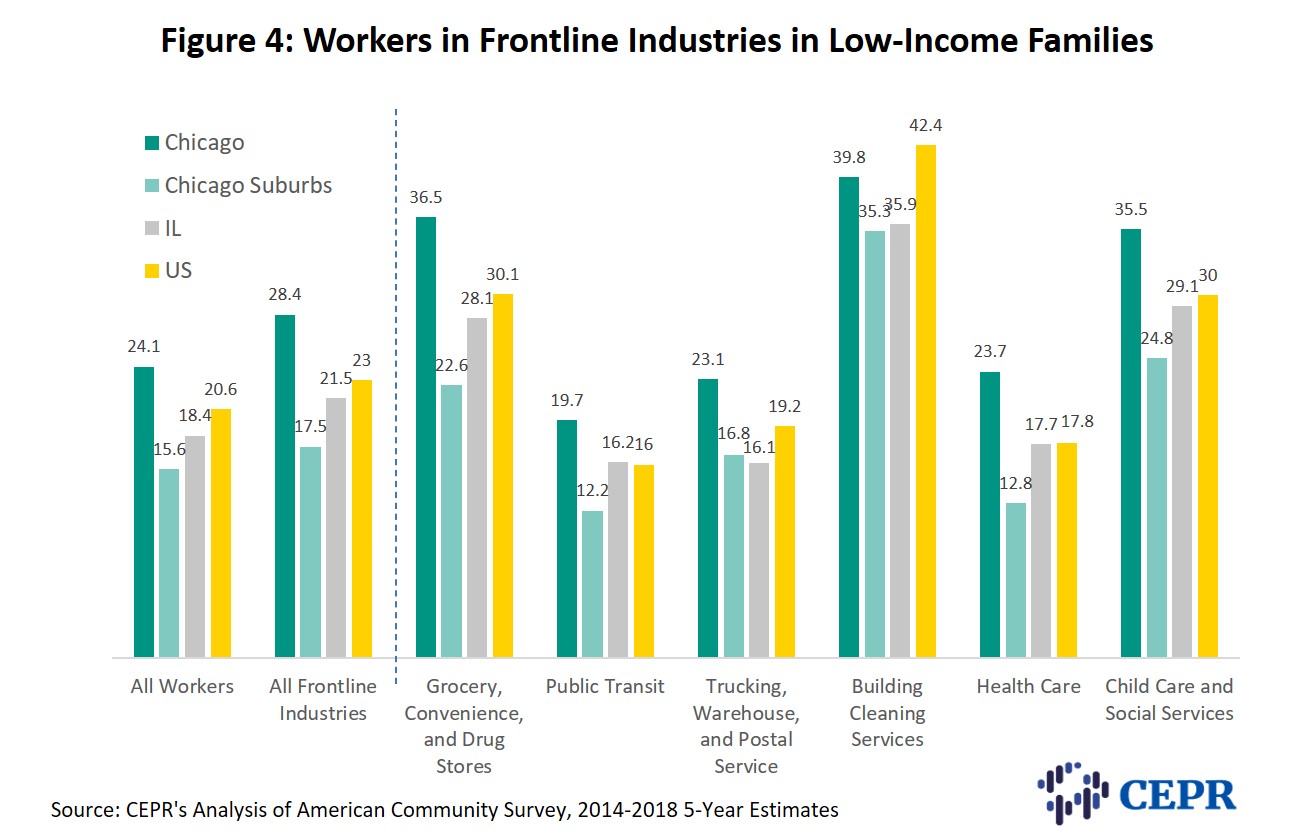 While the COVID-19 legislation passed by Congress to date includes some important protections for frontline workers, too many of these workers remain under protected and under compensated. At the federal level, Senator Elizabeth Warren and Representative Ro Khanna have proposed an Essential Workers Bill of Rights that includes workplace health protections, hazard pay, paid sick days, and other protections. The New York City Council is currently considering a package of similar policies for essential workers.

In Chicago, Mayor Lori Lightfoot proposed the COVID-19 Anti-Retaliation Ordinance, which would ensure, “that employees will be able to remain at home if they have COVID-19 symptoms or are subject to a quarantine isolation order without fear of being fired.” This builds on Chicago’s Paid Sick Leave Ordinance. Cook County also has the Earned Sick Leave Ordinance that provides job protected compensated leave for specified permissible uses. This covers virtually all suburban Cook County workers except in home rule communities that have opted out. States and other large cities, including Illinois and Chicago, should expand their efforts to ensure that essential workers, those specifically on the frontlines of the pandemic, receive the compensation and protection they deserve.

A regional COVID-19 Recovery Task Force has been formed in Chicago to, in part, “conduct a ‘change study’ to gauge the full extent of economic hardship and to provide a baseline for the city as well as the business community.” From the perspective of Chicago, this study will “help prioritize growth in key industry sectors that have either seen significant losses, or which hold potential for workforce growth in a post COVID-19 economy”

Peter Creticos is founder, President and Executive Director of the Institute for Work & the Economy, a small Chicago-based research collaborative specializing in workforce and economic development policies and practice. In 2019, the Institute launched Achieving the Promise of Work (APW), a proposed network of partnerships with communities and policy researchers that will work toward solutions to factors driving adverse changes in the structures of work. Dr. Creticos earned his Ph.D. at the McCormick School of Engineering and Applied Sciences at Northwestern University. He has a Master of Management from Northwestern’s Kellogg Graduate School of Management, a Master of Arts in Political Science from the University of Missouri at St. Louis and a Bachelor of Arts in Philosophy from Washington University in St. Louis.

Why Pay Less? The US Strategy for Vaccinating the World