We would probably think it is, if we relied on CNN and other such sources, but in good old reality land, that’s a hard story to tell. Anyhow, as some of us tried to explain, inflation is a worldwide phenomenon associated with reopening after a worldwide pandemic, which is not yet over.

We got some interesting news on inflation elsewhere today in the Bureau of Labor Statistics (BLS) release of data on import prices. It turns out that the price of imports has been rising even faster than domestic prices, with inflation of 10.4 percent over the last year.

A big part of this increase is higher energy prices, but the data do allow for an important comparison. BLS has a category for imports of manufactured goods from industrialized countries. This would be a wide range of items like cars, car parts, electronics, and other things we would import from Europe, Japan, Canada, and other wealthy countries. In other words, this is a cross-section of goods from countries we think of as similar to the United States.

We can compare this index to the category the BLS has in the Consumer Price Index (CPI), for goods excluding energy and agriculture. I also pulled used cars out of the CPI measure since presumably, we are not importing many used cars. In effect, I’m restricting the index to newly-produced goods. The chart below shows the picture. 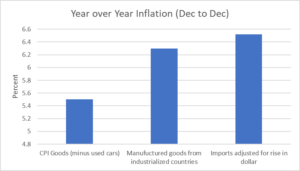 The CPI goods index showed a rise in price of 5.5 percent over the last year. The price of imported manufactured goods rose by 6.3 percent. This is not quite apples to apples since the dollar rose in price against the currencies of our trading partners by 3.5 percent over the last year.[1] The rise in the value of the dollar implies that these goods rose by 6.5 percent measured in the currencies of our trading partners. (Note that these prices do not include shipping costs, which would make the implied rise in import prices even larger.)

Anyhow, the implication is that if we look at the inflation in a roughly comparable set of goods, in similar countries, it was actually greater than the inflation we see in the United States. This is hard to fit with the “it’s Joe Biden’s fault” story, but this is what the data tell us.

Reopening from a pandemic creates bottlenecks. That’s the story elsewhere in the world, as well the United States.

[1] The index used is not entirely accurate for this purpose since it is weighted by all trade, not just manufactured goods imported from industrialized countries.