John Kerry on the Latin American Economies: Getting it Half-Right

On Sunday U.S. Secretary of State John Kerry published an op-ed in the Miami Herald, in which he gave the official Washington view on democracy and economic progress in Latin America.

“Not so long ago, naysayers doubted that the growth of democracy in Mexico and elsewhere across the Americas would translate into better lives for the people who live there,” he writes.

And then the bait and switch: “The last decade has been a story of democracy and economic achievement in Latin America and the Caribbean. The region’s economies grew at a rate of 4 percent a year, trade with the United States nearly tripled, and more than 73 million people were lifted out of poverty.”

Now the part about the regional growth rate is true. But Mexico didn’t share in the recovery: 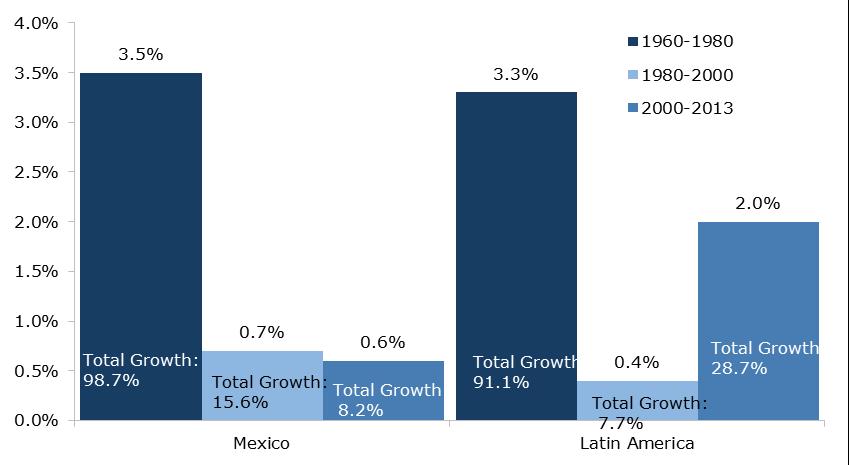 The above figure used GDP growth per person, which is a better measure than the overall growth rate that Kerry uses (since population growth doesn’t increase living standards). Note that Latin America and the Caribbean did in fact experience a growth rebound in the past decade. Average annual growth was just 0.4 percent annually from 1980-2000 – a long-term growth failure that is uncommon in the history of capitalism.

The region grew at a vastly better 2.0 percent annual rate from 2000-2013, despite the Great Recession. But not Mexico, which averaged only 0.6 percent annually, slightly worse than during the lost decades. The poverty rate in Mexico in 2012 (52.3 percent) was as bad is it was in 1994 (52.4 percent). So much for “democracy and economic achievement” in Mexico. The U.S. government of course is reluctant to acknowledge this because Mexico has been run by friendly right-wing governments for decades, and NAFTA has been the model for subsequent commercial agreements.

Of course the story of Latin America’s record-breaking economic failure in the last two decades of the 20th century is one that has been widely unreported in the media, and hasn’t received much interest from economists either. So it’s not surprising that Kerry is unfamiliar with this economic history, and draws a link between democratization and economic development. In fact, Latin America’s fastest growth and development took place prior to political democratization, as the chart above shows. Brazil’s income per person grew by about 180 percent from 1960-80, most of that time under dictatorship; Mexico’s income per person doubled during the same period, under the rule of the PRI, and has been pretty dismal ever since.

For a time the pundits were worried that the Latin American electorate would begin to long for the days of dictatorship and rising living standards. Fortunately, they were wrong (as they generally are on Latin America). Instead, they voted for some economic democracy to go with the political democracy — left governments swept the region beginning in 1998, and the region has done much better (as Kerry noticed), except for Mexico (notwithstanding the 1988 election, which was stolen from the left, and the 2006 election, which was too close to call).

All of the left governments have done much better than their predecessors of the prior 20 years, but not nearly as well in terms of growth and development as the governments – including some dictatorships – of the 1960-1980 era. The story is different in each country, but in general it is not because dictatorships are better for the economy, but because the new left governments haven’t yet figured out how to implement more successful development strategies, or haven’t yet had the time and political space to do so.

Nonetheless, poverty in Latin America and the Caribbean has dropped from 43.9 percent in 2002 to 27.9 percent in 2013, after two decades without improvement. So Kerry is right about “the story of democracy and economic achievement in the region.” He could add that the region’s “second independence” from the United States, over the past 15 years, has also helped. After all, most of the failed policies implemented during the lost decades (1980-2000) were “made in Washington” – either directly by the IMF or through other influences. Maybe he could discuss that in his next op-ed.