• ARTICLE Latin America and the CaribbeanVenezuelaWorld The Americas Blog

The New York Times coverage of Venezuela’s election must have been a disappointment to anyone who, even if they don’t like President Hugo Chávez of Venezuela, wanted to find out how he managed to win yet another election, this time by an 11 percentage point margin.  In the two articles following the election, there was almost nothing about how people’s living standards had improved, or how that might have affected the election result.  As I mentioned in this op-ed yesterday in the International Herald Tribune and New York Times, the election result is similar to the re-election of left governments throughout South America.  In Venezuela, since the Chávez government got control over the oil industry, poverty and extreme poverty have been sharply reduced (see below), access to health care and education greatly increased (with college enrollment doubling and free tuition for many students), and four times as many people eligible for public pensions.  (For a first hand view from the ground on what some of these things look like, see Lisa Sullivan’s report here; and for a nice review of some of the awful media reporting on the elections, see Keane Bhatt’s blog here ).

But the Times articles on the election result are about an “ailing and politically weakened winner facing an emboldened opposition that grew stronger and more confident as the voting neared.” (In most countries an 11 point margin would be considered a landslide).  And it’s about how disaster must strike the economy soon. Hope springs eternal.  I have challenged the “unsustainability” thesis in detail here. As is customary, yesterday’s article relies heavily on opposition sources, such as economist Ricardo Hausmann, for predictions of doom and gloom ahead.  It is worth noting that Hausmann co-authored a paper claiming that the 2004 presidential recall referendum that Chavez won by a margin of 58-41 percent was actually stolen through fraud. Since the Venezuelan election process is one of the most secure in the world, he offered an unbelievable conspiracy theory as well as statistical evidence that turned out to be worthless. (See here, and links in here).

Hausmann also recommended a NYT op-ed published on Saturday, by the Venezuelan opposition blogger Francisco Toro. This is truly an opinion piece, as there are few facts; but unfortunately some of those facts are wrong. The author asserts that the Venezuelan government has been “less effective at reducing poverty than the Brazilian alternative.” But as can be seen in the table below, although the Workers’ Party government in Brazil has done very well in reducing poverty, Venezuela has done better during the same period. And these poverty rates measure only cash income; they do not count the value of free health care to the poor, which if included would show even more poverty reduction in Venezuela.

The author also asserts that “Venezuela’s child mortality and adult literacy statistics have not improved any faster under his government than they did over the several decades before he rose to power.”  Leaving aside literacy, which is poorly measured, the second table below shows infant mortality for the 12 years before Chavez, compared with the 12 years of his administration. As can be seen, infant mortality declined somewhat faster during the Chavez years.

But even if we were to compare the last 12 years to some “several decades,” as the author suggests, it would not necessarily be a meaningful comparison, since there are diminishing returns in these and other health indicators such as life expectancy.  In other words, it is easier to raise life expectancy from 45 to 55 years than it is to go from 70 to 80 years.  (This is also true for the comparison of literacy rates that he makes).

Perhaps more important than the factual errors, the author’s main thesis appears somewhat absurd to anyone familiar with the governments of the region.  In a refrain that has been common for years among the U.S. foreign policy establishment, the author divides the left governments in Latin America into a good left (or “reformist” — here Brazil, Uruguay, and strangely Guatemala) and bad left (or “radical revolutionary” — here Venezuela, Bolivia, and Ecuador).  Interestingly, he leaves out Argentina, which is sometimes placed in the “bad left” category in media and foreign policy circles here. He claims that “behind closed doors” the two camps are at odds.  He offers no evidence for this fantasy.

On the contrary, there is a mountain of evidence contradicting this thesis, and it is not behind some mystical “closed doors” but rather is a matter of public record.  Not only their public statements, as Lula’s most recent support for Chavez in this election (Lula also made his first foreign trip after his own re-election in 2006 to Venezuela, to help Chavez’s campaign). Brazil is every bit as close to Venezuela, if not closer, than the “bad left” governments. One can also look at the actions of these governments: Brazil and Uruguay (two of the author’s “good-left” countries) joined with Argentina to immediately admit Venezuela to Mercosur in June after they suspended Paraguay for its “parliamentary coup” against another left ally, then President Fernando Lugo.  They have acted together in UNASUR to defend democracy in Bolivia in 2008, and Honduras after the military coup in 2009, and to resist Washington’s attempt to expand its military presence in Colombia.  There are dozens of examples of all of the left governments working together with Venezuela and Brazil, to advance a common regional agenda on security, foreign policy, and economic issues.

The author also holds up the president of Peru as a former radical who “remade himself into a Brazilian-style moderate, won and proceeded to govern — so far, successfully — in the Brazilian mold.”  Peruvian security forces have so far killed at least 19 protestors under the current administration; the governments that the author dislikes have also had social unrest and large protests in recent years, but no civilians have been killed by security forces. 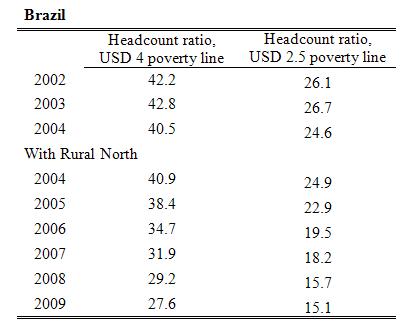 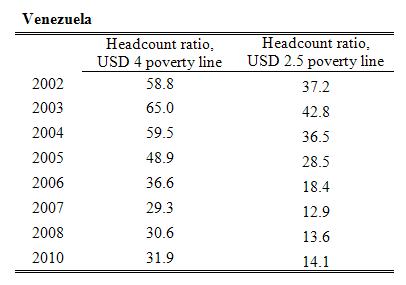 A note about the data:  it is from CEDLAS/World Bank and shows a $4 and $2.50 per day, on a purchasing power parity basis, poverty line.

These tables compare the Brazilian Workers’ Party years (2002-2009, the last year available) with the same years in Venezuela; one could pick different years but Brazil still does not come out ahead.  The year 2010 is used for Venezuela because the year 2009 is not available in this data set; but national statistics show that 2009 was actually worse for Venezuela, due to the recession that year.