One of the lessons learned from the financial crisis of 2008 is that the excessive use of debt – referred to as leverage – undermines the stability of the financial system and poses a threat to the sustainability of companies and the jobs of workers. As we discussed in an earlier post banking regulators have taken steps to limit risky bank loans to companies.

In March 2013 the Federal Reserve, the Office of the Comptroller of the Currency and the Federal Deposit Insurance Corp jointly issued guidelines that encourage banks to refuse to make loans that would raise the debt levels of a company beyond 6 times earnings before interest, taxes, depreciation and amortization (ebitda).

In April of this year, banking regulators voted to restrict the amount of borrowing the very largest banks themselves can do. Under the new, tougher regulations, borrowing by the top eight banks will be capped at $95 for every $100 they hold in total assets.

Nothing has been done, however, to directly limit the amount of debt private equity companies can put on the Main Street companies they acquired in leveraged buyouts (LBOs). As Rosemary Batt and I document in our book Private Equity at Work: When Wall Street Manages Main Street , the excessive use of debt in leveraged buyouts magnifies the returns from successful investments. But when the economy falters, the high debt levels of these highly leveraged companies makes them much more likely to default on their loans or go bankrupt.

An academic study of more than 2,000 highly leveraged companies found that roughly a quarter of them – whether owned by private equity funds or not – defaulted on their debts in the period from 2007 to the first quarter of 2010. As the authors noted, the benefits of loading companies with debt when they are acquired have been widely noted. “Relatively less attention has been given to the potential downside of these transactions, namely that high leverage increases the risk that PE portfolio firms become financially distressed.”

The five-year run-up in the stock market means that companies that private equity targets for acquisition carry a high price tag. Low interest rates and easy access to credit mean that private equity firms can ‘afford’ these high prices because they can borrow huge amounts and load the debt on the companies they buy. As the figure below shows, the situation has gotten completely out of hand. 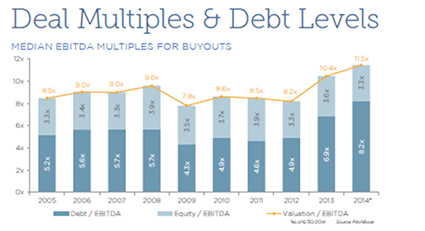 As the figure above shows, cheap credit is having an effect on the amount of debt private equity firms are using in leveraged buyouts.

How Private Equity Firms Will Profit From COVID-19

More Thoughts on a Wealth Tax and Alternatives