The Cost of a Financial Transactions Tax to Retirement Funds

Hawaii Senator Brian Schatz recently introduced a bill proposing a 0.1 percent tax on financial transactions. This means that when people trade a share of stock or a bond, they would pay a tax rate of 0.1 percent ($1 on $1,000), on their trades. According to the Congressional Budget Office, this tax can raise more than $80 billion a year in revenue, somewhat more than the entire annual budget for the food stamp program.

Not surprisingly, the financial industry doesn’t like the idea. It has argued that this tax would be a big hit to retirees and pension funds. While it is understandable that the industry would try to raise such fears to protect its profits, its claims have little basis in reality, as a bit of arithmetic can quickly show.

Suppose that a worker has $100,000 in a retirement fund. If 40 percent of the fund turns over every year, then this worker would be a 0.1 percent tax on the $40,000, if all of the tax is passed on to investors. This is a strong assumption, since it is likely that the industry would have to absorb some of the cost of the tax in lower fees, but even in this extreme case where they can make investors pay the full tax, this worker would be paying $40 a year from their retirement account to the government as a result of the tax.

While no one will be happy to pay an extra $40 a year in taxes, it is worth putting this in some context. The average fees charged by the financial industry to manage a 401(k) account are in the neighborhood of 1.0 percent annually. Many charge as much as 1.5 percent or even 2.0 percent.

But if we use this 1.0 percent figure, this worker with $100,000 in their retirement account is paying the financial industry $1,000 a year from their account. By comparison, the $40 from the financial transactions tax may not seem like a very big deal.

Research shows that trading volume is relatively responsive to trading costs, meaning that if trading costs go up a certain percentage (we’ll say 25 percent in this case), then trading volume will fall at least as much (we’ll say 25 percent). The implication is that the $40 this worker pays out for the financial transaction tax will be offset by a reduction in trading volume. She will be paying 25 percent more on each trade because of the tax, but will be doing 25 percent fewer trades, leaving her total trading costs pretty much unchanged. In effect, the financial industry is stuck absorbing the full cost of the tax, as shown in the graph below. 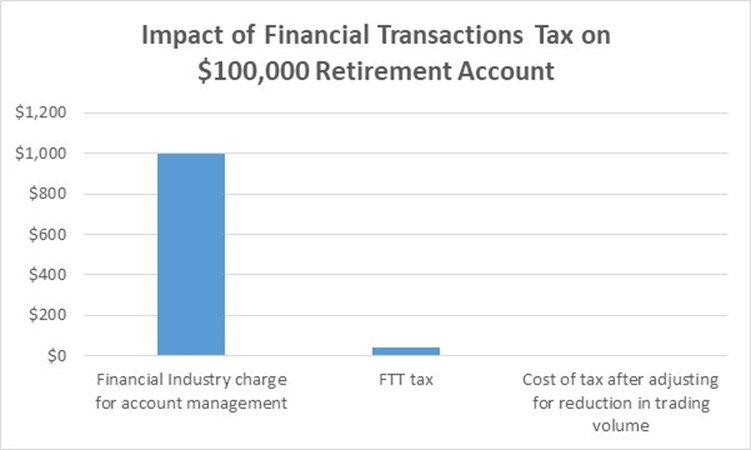 The idea that the reduction in spending on trading is a gain to retirees (or pension funds) will undoubtedly bother many people. It implies that the trading had no value. Unfortunately, this is likely true.

Every investment manager tells us that their trades are mostly winners and therefore they were doing us a favor by engaging in large amounts of trading. In reality, it is only in Lake Woebegone where all the children are above average. For most of us, the trades made by the people managing our funds are a wash, half the time they are winners and half the time they are losers.

This was the great insight of Jack Bogel, the founder of Vanguard. He argued that most people are not making money on their trades, which means the cost of the trades is a pure waste to them. For this reason, he argued that people were better off just putting their money in a broad index fund which tracks the overall market and has minimal trading costs.[1]

To be clear, the ability to trade shares of stock and bonds is valuable, and it is important to have liquid financial markets. But we had highly liquid financial markets two decades ago when trading volume was around half of its current level. If it takes 20 seconds to sell one hundred shares of Apple stock, instead of 10 seconds, it is difficult to see this as a great loss to the economy or individual investors.

In short, for the vast majority of people with retirement accounts, and also for pensions, a financial transactions tax, like the one proposed by Senator Schatz, should be of very little consequence. The amount of tax they would pay is small relative to what they now pay in fees to brokers and investment advisers. Furthermore, the savings from reduced trading volume is likely to offset even this modest cost in most cases.

This is a tax that comes out of the pockets of the financial industry. For this reason, we can expect Wall Street to work hard to convince others that they will be hurt. But this is not true.

[1] For those wondering, yes a tax would still hit an index fund, but to use our $100,000 portfolio example, let’s say the fund turns over 10 percent each year. That means the 0.1 percent tax will cost this worker $10 a year. Even here there is some possibility of a reduction in trading volume since, in response to the tax, the fund manager could decide to track the index slightly less closely.