The Dollar Does Matter for Trade

Consider Figure 1, which shows the trade deficit as a percent of total trade. Since the early 1970s, there have been three large swings toward bigger deficits: the mid 1970s, the mid 1980s and the early 2000s. Each of these swings was more sustained and each subsequent movement toward balanced trade was less complete than the last, leaving a trend of greater imbalances. By the second quarter of 2017, the United States spent $124 in imports for every $100 worth of goods and services exported. At the end of 1974, however, trade had been balanced. 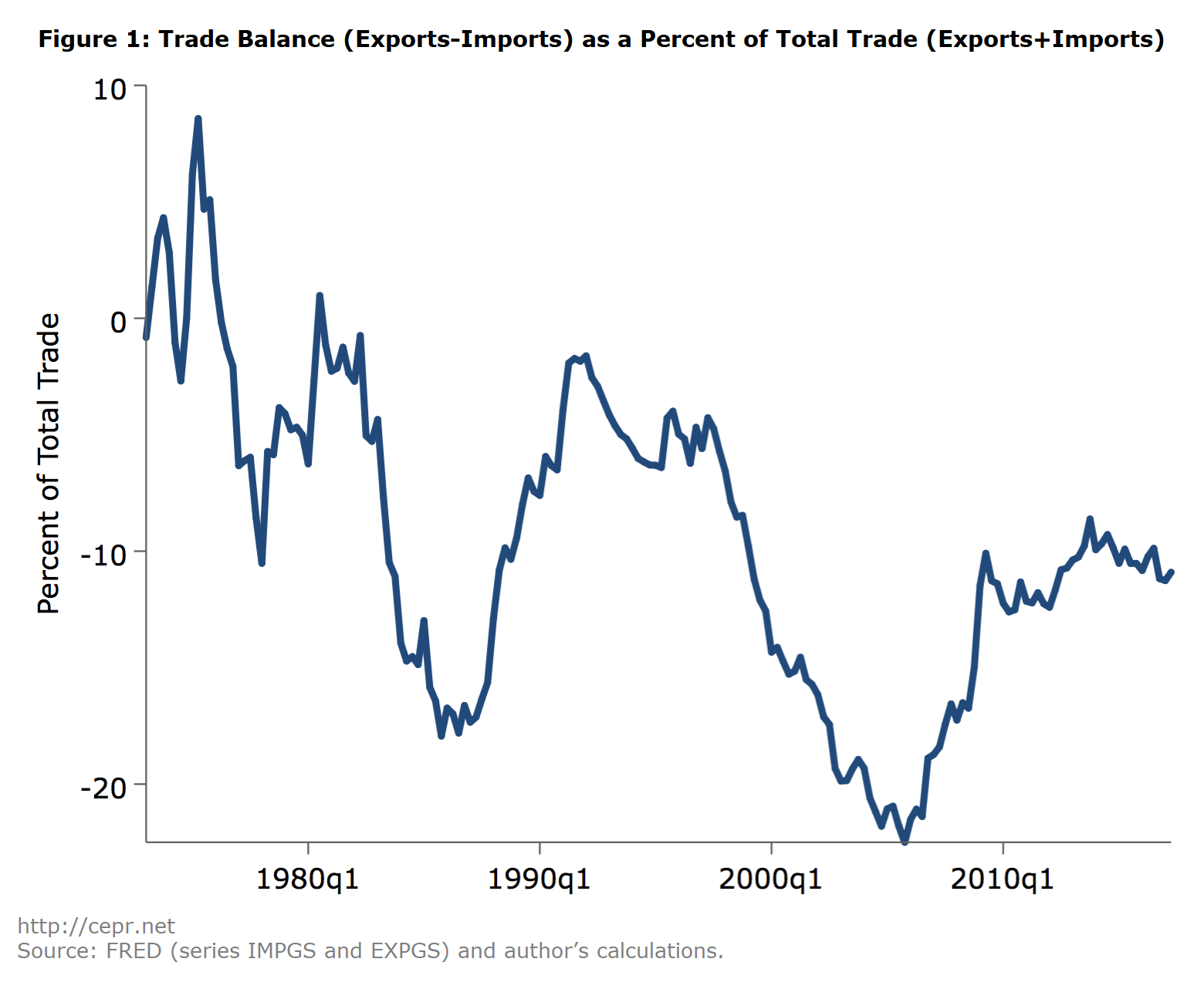 To some extent, this trade imbalance reflects oil imports. However, as Figure 2 shows, removing both petroleum imports and agricultural exports from the trade data does not hugely change the story. If anything, restricting to this core trade amplifies the trend. 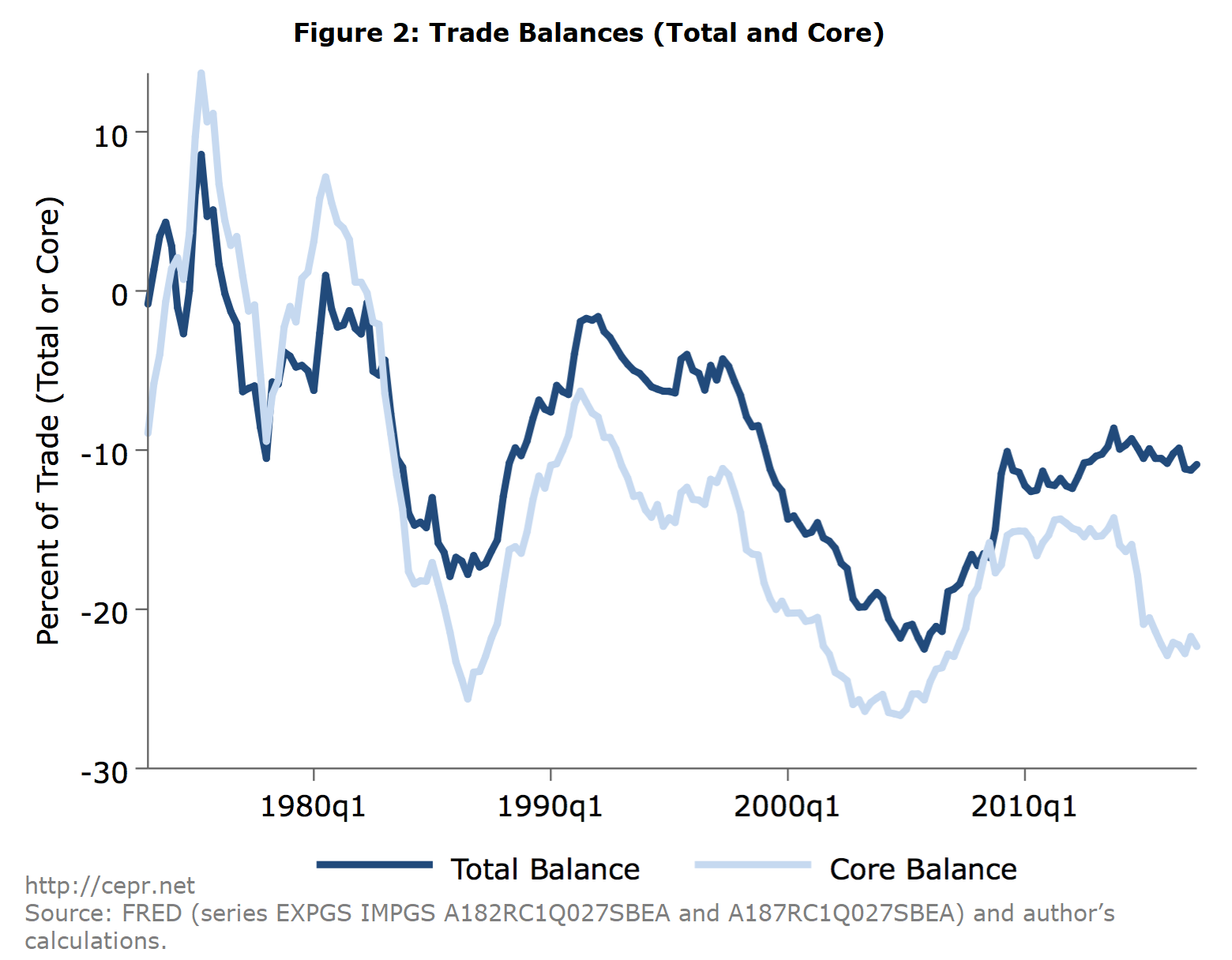 Understandably, increasing trade deficits have coincided with a rising dollar. A product that sells for 100 dollars in the United States would cost 85 euros today compared to only 70 euros a decade ago. (Both dollars and euros have been adjusted for inflation in each area.) This means that U.S. exporters will either have to lower their price to maintain their market, or accept a smaller market, or most likely some combination. In any case, the value of exports will fall.

Similar, but not identical, calculations apply to the foreign producers exporting to the United States. A foreign producer selling an item for 85 euros need only charge 100 dollars today compared to 120 dollars in 2007. They could either keep their profit margin constant and reduce the price of their product to $100, or they could allow their profit margin to expand by setting the price somewhere between $100 and $120. Thus, the foreign producer is usually happy to increase supply to the United States as the dollar rises even if considerable savings were to be passed on to domestic consumers. Typically, real imports should rise with the dollar.

Of course, timing is not exact. It may take time for producers and importers to suppose that a change in currency is going to be relatively long-lived. Retail prices may not move in the short run as importers contract with suppliers over the longer run. By no means would we expect the dollar to be the sole factor in determining trade balances, but taken together we should expect broad co-movement between U.S. trade deficits and the dollar.

Indeed, this is what we observe in Figure 3. Here, we have added a real broad dollar index. 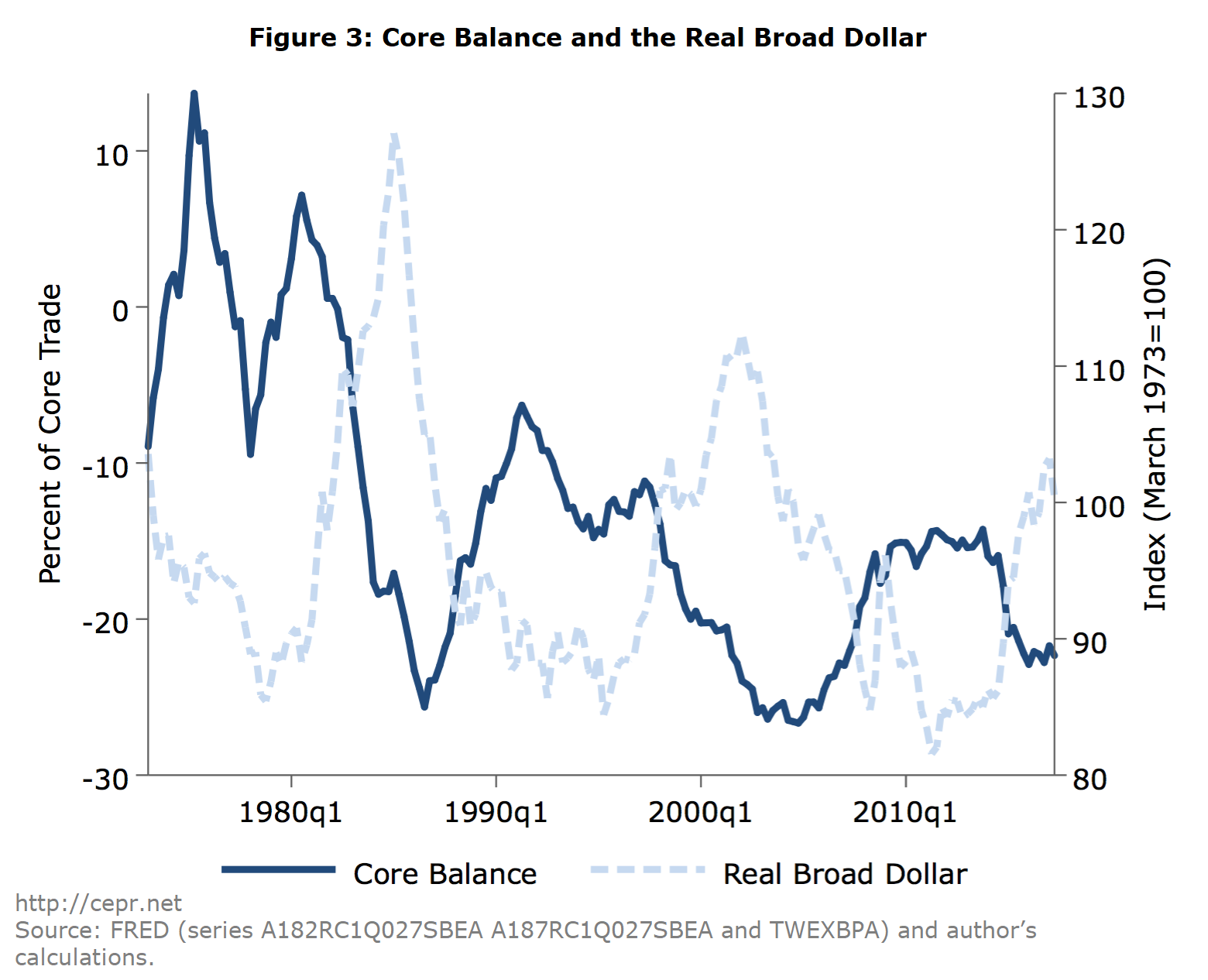 Certainly since 1980, trade deficits have increased sharply in response to large rises in the dollar and declined similarly in response to rebalancing if with some lag. This is particularly clear in the core trade numbers. Other events are also visible in Figure 3 — the sharp but very temporary rise in the dollar in late 2008 did not result in much movement in the trade deficit; the recession of 1974 saw non-petroleum imports fall nearly 25 percent before recovering — but periods of high dollar are clearly associated with large deficits and lower dollar with much more modest ones.