The Menace of an Unchecked Housing Bubble

An unprecedented run-up in the stock market propelled the U.S. economy in the late nineties and now an unprecedented run-up in house prices is propelling the current recovery. Like the stock bubble, the housing bubble will burst. Eventually, it must. When it does, the economy will be thrown into a severe recession, and tens of millions of homeowners, who never imagined that house prices could fall, will likely face serious hardships.

The Incredible Increase In House Prices

The basic facts on the housing market are straightforward: Quality-adjusted house prices ordinarily follow the overall rate of inflation. However, in the last eight years house prices have risen by almost 50 percent in real terms, as shown in Figure 1. The run-up has not been even. In large parts of the country (most of the South and Midwest) there has been little real appreciation in house prices. In contrast, the runups in the bubble areas (the West Coast, the East Coast north of DC, and Florida) have been close to 80 percent in real terms. 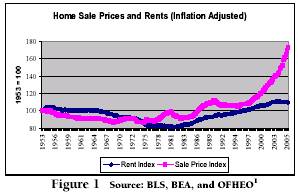 The housing bubble spurs the economy directly by increasing home construction, renovation, and sales and indirectly by supporting consumption. The run-up in house prices has created more than $5 trillion in real estate wealth compared to a scenario where prices follow their normal trend growth path. The wealth effect from house prices is conventionally estimated at 5 cents on the dollar, which means that annual consumption is approximately $250 billion (2 percent of GDP) higher than it would be in the absence of the housing bubble.

Fundamentals Or a Speculative Bubble?

Nobody doubts that there has been a sharp increase in house prices, the question is why: Is it because of fundamentals or a speculative bubble?

A quick examination of the fundamentals should remove any doubts on this issue. On the demand side, neither income nor population growth has been especially rapid. Real per capita income has grown at a respectable rate of 2 percent annually2 since 1997, but this is considerably slower than the 2.8 percent annual rate from 1953 to 1973, a period which saw no run-up in house prices.

Furthermore, the median family income has actually been falling since 2000.

Population trends also would not suggest a surge in demand for housing. The number of households grew by an average of 1.4 million a year from 1995 to 2004. This is far slower than the 2.8 million annual growth rate in the 1970s when the baby boomers were first forming their households3. The age distribution is also not consistent with a surge in demand for housing. The rapidly rising house prices come at a time when the baby boomers are moving out of their years of peak housing demand4.

There also is no obvious supply-side story. While there are environmental restrictions on building, this is not a new phenomenon, and there is no reason to believe that these have become more restrictive in a period of Republican ascendancy. Moreover, the near record pace of housing construction the last few years indicates that these restrictions have not been an impediment to construction.

The best evidence that fundamentals are not the cause of the run-up in housing prices is the fact that there has been no comparable increase in rental prices. While rental prices did rise somewhat more rapidly than the overall rate of inflation during the first part of the house price run-up (see Figure 1), in the last couple of years they have been falling behind inflation. If the run-up in home sale prices was being driven by fundamentals in the supply and demand for housing, then there should be substantial price increases in both the rental and ownership markets. The fact that only the ownership market shows an unusual run-up in prices strongly supports the view that this price increase is being driven by speculation rather than fundamentals.

The Bubble Will Break Eventually

If housing prices are a speculative bubble, then eventually, prices will return to normal levels reflecting the value of housing services. The country has been building houses at a near record pace for the last few years, and this pace will continue as long as prices remain near their bubble peaks. At the moment, this oversupply has been absorbed by speculators and by a record vacancy rate in the rental market, but eventually excess supply will put downward pressure on sale prices (part of this story is the conversion of rental property to ownership units), which will cause speculative demand to evaporate.

Just as the supply of shares of worthless Internet companies eventually outstripped demand, the supply of housing will eventually place enough downward pressure on housing prices that the bubble levels will prove unsustainable. How fast this happens depends on how quickly mortgage interest rates rise from what are still extraordinarily low levels.

The adjustment process will not be pretty. Residential construction accounts for more than 6 percent of GDP, and construction drops off tremendously during times of recession. For example, in the mid-seventies construction dropped almost 40 percent, and in the early eighties it fell by almost 30 percent. Given the unprecedented burst of construction over the last five years, downturns of this magnitude are certainly plausible. In addition, with a correction in housing prices, the loss of bubble wealth will lead to a sharp decline in consumption. If the full $5 trillion in bubble wealth were to disappear, the implied drop in consumption would be $250 billion annually, or 2 percent of GDP.

Another consequence of the collapse of the housing bubble will be the financial fallout from an unprecedented wave of defaults. Nationwide, homeowners’ ratio of debt to equity is at a near record high. This is itself a startling fact given all the equity created by recent appreciation. People have been borrowing against their homes as they have increased in value and many new homebuyers are buying homes with smaller than normal down payments. When the downturn in house prices occurs, many homeowners will have mortgages that exceed the value of their homes, a situation that is virtually certain to send default rates soaring. This will put lenders that hold large amounts of mortgage debt at risk, and possibly jeopardize the solvency of Fannie Mae and Freddie Mac, since they guarantee much of this debt. If these mortgage giants faced collapse, a government bailout (similar to the S&L bailout), involving hundreds of billions of dollars, would be virtually inevitable.

Breaking The Bubble Sooner Is Better Than Later

Given the prospect for a collapse of the housing bubble and its impact on the economy and the financial system, there is a strong case for a preemptive strike. The government cannot prevent the market from collapsing and sustaining the bubble just leads to more overbuilding, which will make the eventual collapse even worse. The government should have taken steps to prevent the bubble from ever getting this large. Having failed thus far, the best it can do at this point is to burst the bubble before it gets even larger, creating the conditions for an even bigger disaster down the road.

The best and simplest way to burst a bubble is talk. If the Fed and top treasury officials simply made the basic data available and explained to the public about the inconsistency of current housing prices with long-term trends (as they have done with budget deficits), their warnings would almost certainly be widely reported in the media. Every real estate pusher in the country would have to deal with buyers armed with this information. While the typical homebuyer may never understand these economic arguments, the fact that people in positions of authority are issuing warnings about future house prices would almost certainly dampen their enthusiasm for home ownership.

Whether talk would be sufficient to burst a financial bubble is an open question—it has never been tried—but since talk is cheap, there seems little reason not to use the power of information as the first weapon against a bubble. If this fails, the Fed has a second weapon: higher interest rates. Low mortgage rates have been the essential fuel for this run-up in home prices. If mortgage rates were pushed back to more normal levels (e.g., 7 to 8 percent), it would almost certainly lead to a sharp reduction in housing prices.

Deliberately destroying trillions of dollars of wealth may seem like perverse policy, but it is important to recognize the context. If there is in fact an unsustainable run-up in housing prices, then the question is not whether prices will fall, but rather when prices will fall. The wealth is not really there. It is an illusion.

Similarly, the number of homeowners who are adversely affected grows greater each month that the bubble persists. A homeowner, who bought a house 15 years ago, sees the price triple and then decrease by forty percent will no doubt be upset over not having sold at the peak price, but he is not directly harmed by this fall. On the other hand, a family that buys its home at the bubble peak and then the value of its major financial asset falls by one-third will be badly hurt. Every year, more than eight million people are buying new or existing homes, most at bubble inflated prices.

In addition, tens of millions of baby boomers are approaching retirement with plans based on the assumption that the value of their home will hold steady, or even continue to rise. As a result, they are saving very little. The decision not to save because of the wealth created by the housing bubble (and previously the stock bubble) will leave this huge cohort ill-prepared for retirement, a problem that worsens each month the bubble persists.

The Fed Needs To Step Up To The Plate

The Fed has taken the view that bubbles come and go and that this is not their business —a view that seems difficult to justify given the enormous consequences from the growth and collapse of financial bubbles. These consequences certainly seem much larger than the impact of modest upticks in the inflation rate, which has been the Fed’s driving concern over the last two decades.

The decision to ignore financial bubbles also seems inconsistent with the Fed’s past decisions, where it has made the stability of the financial system a central concern. This was its justification in stemming the 1987 stock crash and more recently when it intervened in the unraveling of the Long-Term Capital hedge fund. Since the Fed recognizes the need to act to preserve the stability of the financial system, there seems little justification for sitting on the sideline when financial bubbles that pose enormous threats dominate the economy. It is unfortunate that it might require the collapse of the housing bubble, and the enormous damage it will entail, to finally prompt some new thinking on this issue among the nation’s policymakers.

Baker, D. 2002. “The Run-Up in Home Prices: Is It Real or Is It Another Bubble,” Washington, D.C.: Center for Economic and Policy Research, available at https://cepr.net/publications/housing_2002_08.htm.

Baker, D., and D. Rosnick. 2005. “Will a Bursting Bubble Trouble Bernanke? The Evidence for a Housing Bubble,” Washington, D.C.: Center for Economic and Policy Research, available at https://www.cepr.net/publications/housing_bubble_2005_11.pdf.

1The series use the CPI rent index from 1953 to 1982 and the owner’s equivalent rent index (which excludes utilities) since 1982 for the rent index. The sales price index uses the BLS CPI home price index until 1975, averages the change in the CPI index and the OFHEO House Price Index (HPI) from 1975 to 1982, and the HPI since 1982. All numbers are deflated by the GDP deflator.