In a 2012 Issue Brief and a 2013 blog post, we reported on the dramatic change since 1979 in the composition of the low-wage workforce. Low-wage workers today are much older and much better educated than they were at the end of the 1970s.

Here are the numbers updated through 2013. 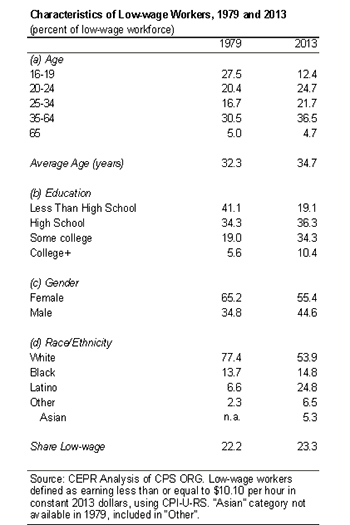 (Note that if you compare across all three sources, the 1979 numbers change slightly with each new set of numbers. This is because the same dollar cut-off in the most recent year –2011, 2012, or 2013– corresponds to a slightly different inflation-adjusted value of that cut-off in 1979. The 2011 numbers differ further –though, again, only slightly– because we initially used a $10.00 cut-off for 2011 and then switched to a $10.10 cut-off for 2012 and 2013 to reflect the level currently under consideration in Congress.)

A May Day Assessment of Union Membership in the United States