Okay, this is not 100 percent kosher, but since we seem to have entered the political silly season, and the media have jumped in with both feet, these are real numbers from the Commerce Department. The $1.2 trillion increase refers to all labor income, which counts employer provided health care insurance, pensions, and other benefits. More importantly, these data are not adjusted for inflation, but even when price increases are factored in, labor income is still up by 1.6 percent from when President Biden took office.

This is worth noting, because the news media have filled their pages and broadcasts with stories of workers who are suffering because of the rise in gas prices and inflation more generally. There are undoubtedly many workers who are seriously suffering, but this is always true. Since labor income is higher today than it was before the pandemic, we can reasonably infer that many more workers were having trouble making ends meet in 2019 than today. If we hear more stories of hardship now, it is because of the decision by the media to give us more stories of hardship, not because more stories exist in the world.

For those who want a picture of how labor income growth since Biden took office compares with prior years, here’s the picture since 2010. 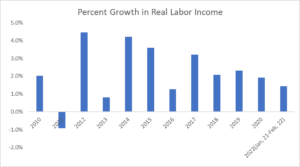 As can be seen, labor income generally rises. The one exception was 2011, when austerity measures slowed job growth and high unemployment dampened wage growth.

The other item that jumps out in this picture is that in 2014 and 2015, which were the second and third strongest year for labor income growth, oil prices fell sharply. Since wage growth and job growth don’t usually change much year by year, changes in the rate of inflation are a major determinant of the pace of real labor income growth. Oil and energy prices in turn, are major factors in the rate of inflation.

The jump in oil prices since the pandemic ended, which has been aggravated by disruptions, and the threat of disruptions, associated with the Russian invasion of Ukraine, has been a major factor depressing real labor income growth since President Biden took office. The impact of higher oil prices, and other supply chain issues associated with the pandemic, have led to a big jump in inflation rates everywhere. For example, in the United Kingdom inflation has risen by 6.2 percent over the last year. In Germany, inflation has been 7.6 percent.

It is understandable that Republicans don’t like to call attention to the extent that the pandemic is responsible for higher inflation and its negative impact on living standards. It is a bit harder to understand why ostensibly neutral reporters don’t like to call attention to this fact. It’s a bit like reporting on a rise in homelessness in an area, without mentioning that much of the housing stock had been wiped out by a hurricane. But such is the state of reporting in the United States today.

Will CNN Put Donald Trump Back in the White House?

How Do We Get a Wage-Price Spiral When Wage Growth Is Slowing?

The Not Very Good May Price Report