Opponents of Obamacare are still muttering about how the bill is a jobs killer and claiming the Congressional Budget Office (CBO) warned that it will lead to a loss of more than two million jobs. Of course the CBO analysis did not say the Affordable Care Act (ACA) would destroy jobs; CBO said that by allowing people to get health care outside of employment, the ACA would lead to a reduction of two percent in the total number of hours worked.

This means that older workers in bad health may decide to retire early, because now they can get insurance in the individual market. Workers suffering from cancer or other serious diseases will be able to quit their jobs or work fewer hours because they will no longer be dependent on their job for insurance. And, many parents of young children may opt to take some time off from their jobs or cut back their hours.

This is the “job loss” that has gotten opponents of the ACA so excited. But there is another aspect of this picture that should get other people excited. Back in intro economics we teach students about supply and demand. Other things equal, we expect a reduced supply – in this case of workers – to lead to a higher price or wage. In other words, a reduction in labor supply associated with the ACA might lead to some increase in wages.

We have an opportunity to test this proposition since Tennessee effectively did Obamacare in reverse, eliminating health insurance subsidies for low and moderate income adults without children in 2005. If the resulting change in labor supply has an impact on the market, then we would expect to see a drop in wages in Tennessee relative to other states. 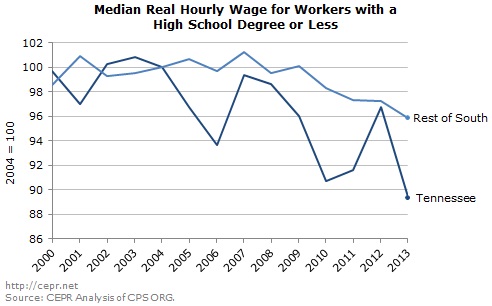 As can be seen, this group of workers lost ground throughout the South in the years since 2005, but the drop was far sharper in Tennessee than elsewhere, a decline of 10.6 percent in Tennessee compared to an average drop of 4.1 percent in the other southern states.  Since Obamacare will change the labor market in the opposite direction, reducing the supply of labor, we might infer that it will lead to an increase in the real wage.

This analysis is far from conclusive. Other factors could explain the sharp drop in relative wages in Tennessee. However, this picture certainly supports the view that Obamacare could lead to an increase in wages for a substantial group of workers exactly by voluntarily reducing the supply of labor. If so, this will be good news for tens of millions of workers and bad news for those looking for cheap help.

A May Day Assessment of Union Membership in the United States