The World Bank has joined the “doom and gloom” chorus on Venezuela’s economy. And in Haiti, the Washington-based institution again appears overly optimistic.

On Tuesday, January 15, the World Bank released its latest global economic forecast, which projects 2013 global GDP growth at 3.4%, up 0.4% from its preliminary estimate for 2012 and down a half a percentage point from its previous forecast in June. The Bank emphasized that the low rates were largely a result of sluggish growth in the U.S. and Europe. As for Latin America and the Caribbean, the regional predicted growth for 2013 is listed at 3.6%, up more than half a point from the estimated figure for 2012.

As with many media commentators over the past few years, the World Bank predicts that Venezuela’s economic recovery from the global recession cannot hold up. The Bank forecasts 1.8% growth in 2013, a sharp drop from an estimated 5.2% last year. Since the Venezuelan economy is not slowing, there is no obvious reason to predict a collapse in economic growth.

Furthermore, we can see that the projection numbers follow a trend. Both the World Bank and the IMF have been consistently underestimating growth projections in Venezuela. 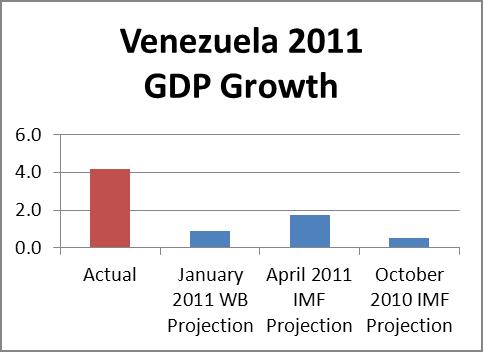 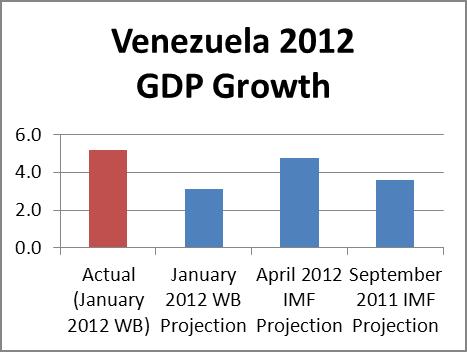 Meanwhile, in Haiti the Bank predicts a sharp jump in GDP growth, from 2.2 to 6.0 percent, while the IMF has forecast growth at 6.5%. When we compare these numbers to those of previous years, we can see the opposite trend of that in Venezuela.  All the projections for 2012 overestimated growth by well over 5 percentage points. 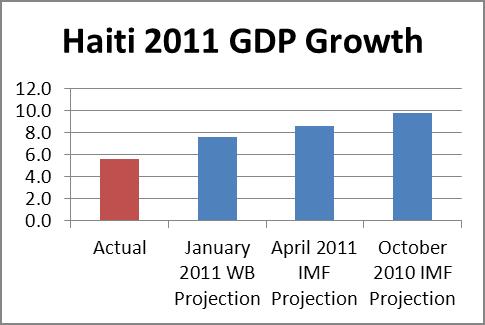 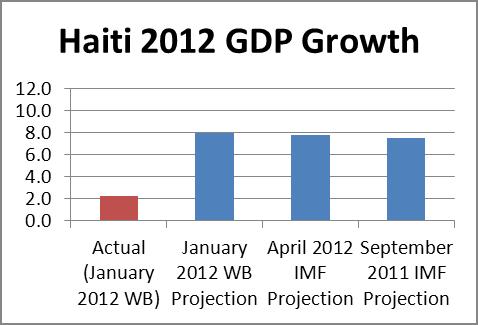 It is unclear why both the IMF and the World Bank have projected such high growth for Haiti considering the many severe challenges facing the country in the wake of the 2010 earthquake. As we have noted on an ongoing basis over the past three years, major international donor funding has been slow to materialize, progress on housing, water, sanitation and other infrastructure has been minimal, and there have been few examples of improvements that would suggest an upsurge in growth is on its way. There has been even more bad news in the wake of Hurricane Sandy at the end of October, which devastated crops and left 2.1 million people “food insecure.” The World Bank and IMF’s projections of 6 percent or higher GDP growth in 2013 seem unfounded.

The IMF’s pessimistic growth projections for Venezuela fit a pattern going back several years. GDP growth forecasts for Argentina were off by 5.0, 5.2, and 4.3 percentage points for the years 2004-2006, and for Venezuela they were off bya gigantic 10.6, 6.8 and 5.8 percentage points in the same years.  These patterns suggest a politicization of the IMF’s projections for certain countries, since the Fund was consistently overly optimistic on Argentina’s growth in the years that the Argentine government was still following the IMF’s policy recommendations.