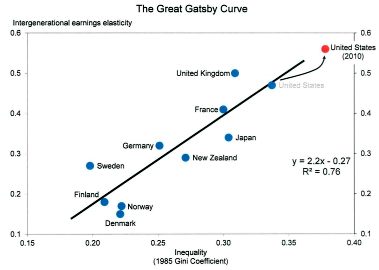 Economist Miles Corak, one of the world’s leading experts on economic mobility, has written a devastating take-down of the core of two recent pieces by the Brookings Institution’s Scott Winship. Winship has been arguing that President Obama, his economics team, and many others on the political left are wrong to claim that economic mobility has been on the decline in recent decades. But, as Corak documents, it is Winship that is misreading the data.

Writing in the National Review Online, Winship said that the president’s “claim of falling upward mobility … rang false” and “is contradicted most of the research that has been conducted to date.” Winship’s criticisms focused on some pretty technical issues in research conducted by Berkeley economist David Card, one of the country’s foremost labor economists and winner of the 1995 John Bates Clark medal. After reviewing Card’s numbers, Winship concludes that upward mobility today “is no worse than it has ever been and it does not translate into a general lack of opportunity for the middle class.”

Next, Winship took aim at the chair of President Obama’s Council of Economic Advisers, Alan Krueger, another prominent labor economist who was at Princeton before joining the Obama administration in 2009. In a speech last week at the Center for American Progress, Krueger presented what he called “The Great Gatsby Curve,” a graph (see above) that shows a strong relationship across rich countries between higher levels of economic inequality and lower levels of economic mobility.

Winship called out Krueger in a guest post at Reihan Salam’s blog at the National Review Online, calling Krueger’s speech “deceitful.” Again, Winship’s piece revolves around a number of technical points in Krueger’s analysis, and again, Winship concludes: “The data indicate that it is no less true today than it was in the past that poor children can make a better life for themselves.”

But, here is where Miles Corak steps in. At his personal site, Corak writes that Winship “does a disservice to a well-established literature on generational mobility.” After Corak’s own detailed review of the data, Corak arrives at a pretty damning series of conclusions: “All of Winship’s statistical concerns with estimates of the generational elasticity have been addressed since the beginning of this literature”; “Winship’s questioning of the robustness of the empirical literature on the intergenerational elasticity by citing one study is misleading”; “Making projections is tricky, but not because of anything Winship says”; and, finally, Alan Krueger “got his facts right.”

PREVIEW: What to Look for in the Second Quarter 2021 GDP Report

Here’s How to Understand the Next Jobs Report