Senator Patty Murray and Representative Bobby Scott introduced a bill yesterday that would increase the federal minimum wage from its current level of $7.25 per hour to $12.00 by 2020.

In a paper also released yesterday, David Cooper and Lawrence Mishel of the Economic Policy Institute and I assess how a minimum wage of $12 in 2020 would compare with the historical experience.

We use 1968 as our main reference point. That is the year that the minimum wage reached its peak value by most measures—and the national unemployment rate was just 3.6 percent. With respect to purchasing power, for example, the 1968 minimum wage was equal to $9.54 per hour (in 2014 dollars), or more than 30 percent higher than its current value. In 1968, the federal minimum wage was also equal to 33 percent of the hourly productivity of the average worker. By 2014, the federal minimum stood at only 13 percent of average productivity. 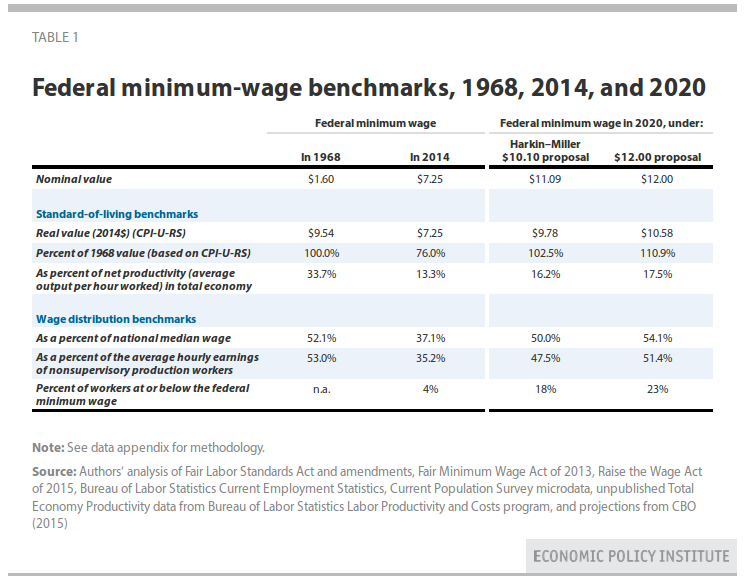 These calculations (and others we present in the report) all suggest that by 2020 the economy will be able to afford the new, higher minimum wage.

The report also highlights three reasons why the economy today is much better placed to absorb a minimum wage on a par with the level last seen in 1968.

Second, low-wage workers are older and much better educated today than they were in the past. Today’s low-wage workers are much more likely to have a high school degree or even a college degree than they were four or five decades ago. They are also older and therefore likely to have more job experience. Since economists generally believe that older and better-educated workers should earn more than younger and less well-educated workers, again, the economy appears able to afford to pay workers at least as much as they did roughly five decades ago.

Finally, differences in state wages have gotten smaller since 1968. The median worker in the lowest wage state in 1968 (Tennessee) earned only 78 percent of what the national median worker received. By 2013, no state had a median wage that was less than 90 percent of the national median. As a result, a federal minimum will have less of an impact on low-wage states now than it did in 1968. (Of course, wage inequality is much higher today than it was in 1968. But, this is because the wages of low-wage workers within each state are much lower now relative to where they were in 1968. An important reason for the widening of wage inequality at the bottom is precisely the decline in the value of the federal minimum wage.)

Two other key features of the bill that I want to point out, but leave for another day to discuss, are: the gradual elimination of the existing sub-minimum wage for tipped workers (currently just $2.13 per hour, where it has been since the early 1990s); and the setting of increases in the federal minimum wage after 2020 to match growth each year in the national median wage. Both actions which would tie all low-wage workers’ prospects to the wage advances achieved by the rest of the workforce.

Here’s How to Understand the Next Jobs Report