Latin America in the Post-Bush Era

The Council on Foreign Relations

What Can We Expect in the Next Phase of U.S.-Latin American Relations?

The United States' influence in Latin America has plummeted during the Bush Administration, as political and economic change has swept much of the region. The Council on Foreign Relations noted recently that "If there was an era of U.S. hegemony in Latin America, it is over." Álvaro Vargas Llosa, Senior Fellow and Director of the Center on Global Prosperity at the Independent Institute, and CEPR Co-Director Mark Weisbrot, recently discussed how the new U.S. President and Congress might deal with this new reality. 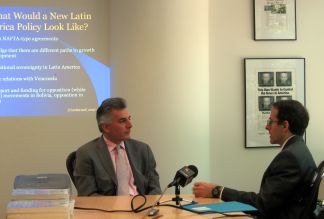