Port-au-Prince – It “shook the house, like this” he says, violently rocking back and forth, acting it out. He yelled to his wife to get out, grabbed the children and went to the street. “Ten minutes later it was,” he said, bringing his hands together, “flat.” With this, Sonny Jean’s post-earthquake story begins; three years later we’re speaking at one of Haiti’s first sewage treatment plants, located in Titanyen. 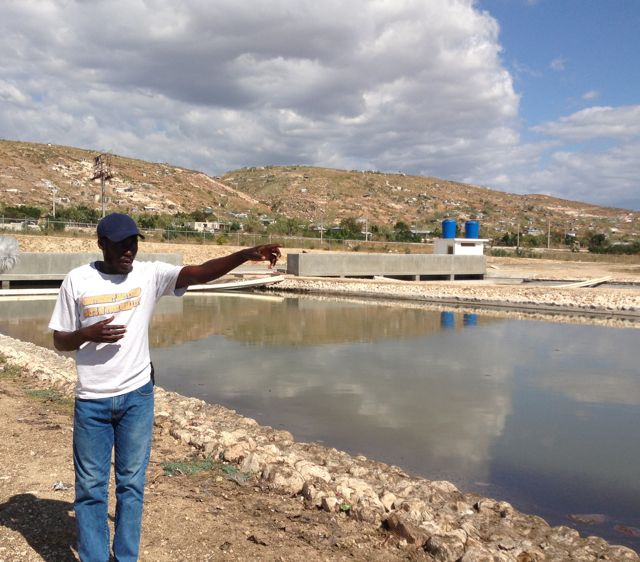 Sonny Jean, showing off the DINEPA sewage treatment plan in Titanyen; Hundreds of shelters dot the background in Kanaan.

Like many of those who lost their homes, Sonny settled with his family on the Champ de Mars, the public park in downtown Port-au-Prince across from where the national palace once stood, which later became home to at least 20,000 people. Sonny lived there with his family in a small shelter and “it was tough,” he said, adding, “it wasn’t the place I wanted to raise my family.” In December of 2010, a friend tried to convince him to move to a tract of land the government had declared to be of public utility. While at first skeptical of moving so far from downtown Port-au-Prince, he knew he couldn’t stay in the Champ de Mars camp either.

Eventually, he packed up his tent and what belongings had survived the earthquake and went with his wife and children to Kanaan, a vast expanse of land on a hillside about 20 km outside of Port-au-Prince. Like the majority of those who have left the camps, it wasn’t through a rental subsidy or because they were given a temporary shelter or had their home repaired. According to Sonny, he was the first to set up a tent so far west in the area, though he’s now joined by hundreds of others close by, and up to hundreds of thousands in all of Kanaan.

But life there is difficult and was especially in those early days. “I was lonely, man, scared,” he said.  With the wind whipping incessantly and no other families around, there were many restless nights.

Later, across the street from his new home, Sonny noticed some people starting to clear the land. He told his wife he was going to check it out; she was skeptical anything good would come of it. He went across the street, standing alone, just looking on. Eventually he heard someone, who seemed to be in charge, speaking Kreyol but “different than I speak it.” So he responded in English, which he had picked up in the years he had lived in the U.S. on a seaman’s visa. (Though he’d like to return to the U.S. someday, he hasn’t been able to get a new visa.)

The manager, an English speaker from another Caribbean island, was impressed by his English, and after speaking for awhile, offered him a job on the site.

We walk past the two pools where the water is held. The third, where the filtered water collects, looks like the blue of the Caribbean compared to the murky pools before it. 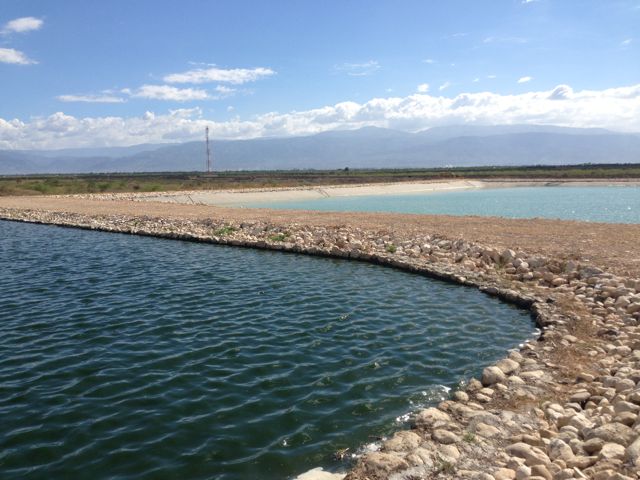 He shows off the workers, dredging solids out of the first pool – high boots, gloves, masks, full suit. Throughout it all he’s insistent on dumping chlorinated water on the ground to wash our feet off – “you don’t want to bring cholera home with you!” The plant, while still relatively new, stands as one of the great achievements of post-earthquake construction, especially given the ongoing cholera epidemic that has killed nearly 8,000. There is another plant, not far away, in Morne a Cabrit, and many more planned throughout the country. Amazingly, before September 2011, Haiti had never had a sewage treatment plant. Nevertheless, much more will need to be done to meet the vast water and sanitation infrastructure needs of Haiti. 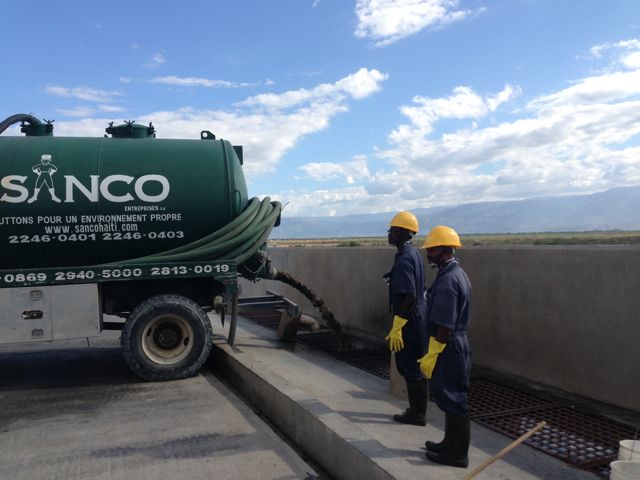 Sanco, one of Haiti’s private waste collectors, dumps wastewater at Titanyen. There has been a problem of getting private companies to pay the fees at the plant, required to fund its operations; two workers look on before cleaning the area.

He knows he’s one of the lucky ones in Kanaan, where there are few opportunities to earn an income. He’s been able to save up some, reinforce his house and add a few rooms. Occasionally, Sonny can afford to buy a large sack of rice that can last his family for at least a few weeks. But there is tremendous need in the community. “Sometimes people come and ask for some food. I tell my wife to give what we can so they can eat and try and feed their family.” He adds, smiling, “to receive, you have to give …it’s true, I see it.”

Yet, while Sonny was beaming with pride at the new sewage treatment facility, like the livelihoods of the hundreds of thousands in Kanaan, it’s future remains tenuous. While donors and agencies from the international community provided the funds to build the plants, DINEPA – Haiti’s under-funded water authority – has been left to a large extent alone to run it. The lack of an operational budget remains one of the biggest obstacles to its continued functioning. As is the case with so many projects in Haiti over the last three years, (and decades previously for that matter), while there may be funding for building things, there is often little funding for what in the end is the most important part: ensuring a project’s long term sustainability.