For the second time in the last five elections we are seeing a situation where the candidate who came in second in the popular vote ends up in the White House. This is of course due to the Electoral College.

As just about everyone knows, the Electoral College can lead to this result since it follows a winner take all rule (with the exception of Nebraska and Maine). A candidate gets all the electoral votes of a state whether they win it by one vote or one million. In this election, Secretary Clinton ran up huge majorities in California and New York, but her large margins meant nothing in the Electoral College.

The states that are overrepresented in the Electoral College also happen to be less diverse than the country as a whole. Wyoming is 84 percent white, North Dakota is 86 percent white, and Rhode Island is 74 percent white, while in California only 38 percent of the population is white, in Florida 55 percent, and in Texas 43 percent. White people tend to live in states where their vote counts more, and minorities in places where it counts less. This means that the Electoral College not only can produce results that conflict with a majority vote, but it is biased in a way that amplifies the votes of white people and reduces the voice of minorities. 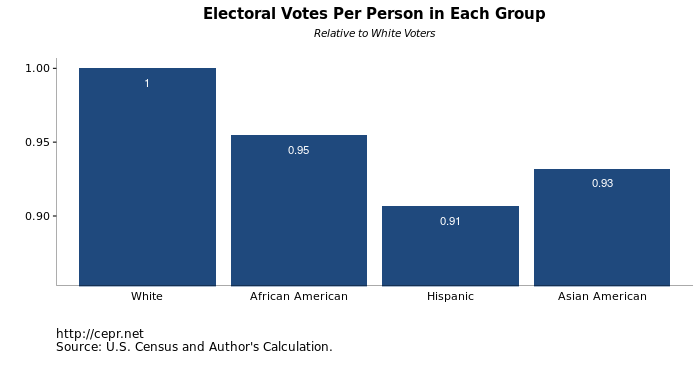