Is Amazon’s Stock Price Justified? What It Means If It Is

Back in the 1990s stock bubble it was common for analysts to say things like price-to-earnings ratios (PE) no longer mattered. They were right, at least for a while, as the stock valuations of companies like AOL and Priceline soared way beyond anything that could conceivably be justified by current or future earnings.

Of course after a while, price-to-earnings did come to matter, as the stock market lost half its value from its peak in March of 2000 to its trough in the summer of 2002. The tech heavy Nasdaq lost close to 80 percent of its value. Many of the big tech enthusiasts were wiped out in this crash. While it might seem old-fashioned, people presumably value stock based on how much earnings a share commands, not the beauty of the stock certificate or how cool the company is.

With this in mind, it is interesting to think about what the Amazon future might look like given that it now has a market capitalization of roughly $480 billion with current profits of roughly $2.6 billion. This gives it a price-to-earnings ratio of 184 to 1.

Suppose we assume that ten years from now Amazon looks more like a normal company with modest growth potential, since at that point it will be thirty years old. This means it might have a price-to- earnings ratio closer to 20 to 1. This is still well above historic averages in the stock market, but we are plausibly in an era in which price-to-earnings ratios will be higher, and returns lower, than in prior decades.

Let’s assume that people expect a real return of 7.0 percent annually on their Amazon stock. This is the long-term average return in the stock market. While returns are likely to be somewhat lower going forward,  it is reasonable to think that investors would expect a higher return on its stock than say GM or Walmart since Amazon is a fast-growing company and doesn’t pay a dividend.

This assumption implies that in ten years Amazon’s market capitalization will be just under $980 billion, in today’s dollars. If Amazon has a price-to-earnings ratio of 20 in 2027 then it will have after-tax profits of $49 billion in 2027. The Congressional Budget Office projects that after-tax corporate profits in 2027 will be just under $1,400 billion (in 2017 dollars), which means that Amazon will be earning an amount roughly equal to 3.5 percent of all U.S. profits in 2027.

There are three ways to get from its current profit level to the $49 billion it will need in 2027 to have a 20 to 1 PE ratio in that year. It can keep its current profit margin and have sales expand to a point where its profits are $49 billion. It can have its share of the market stay roughly constant, implying 2.0 percent annual growth, and have its profit margin increase, or it can have some combination of the two.

In the first scenario its sales will have to expand to $2.44 trillion by 2027. This is shown in Figure 1 below 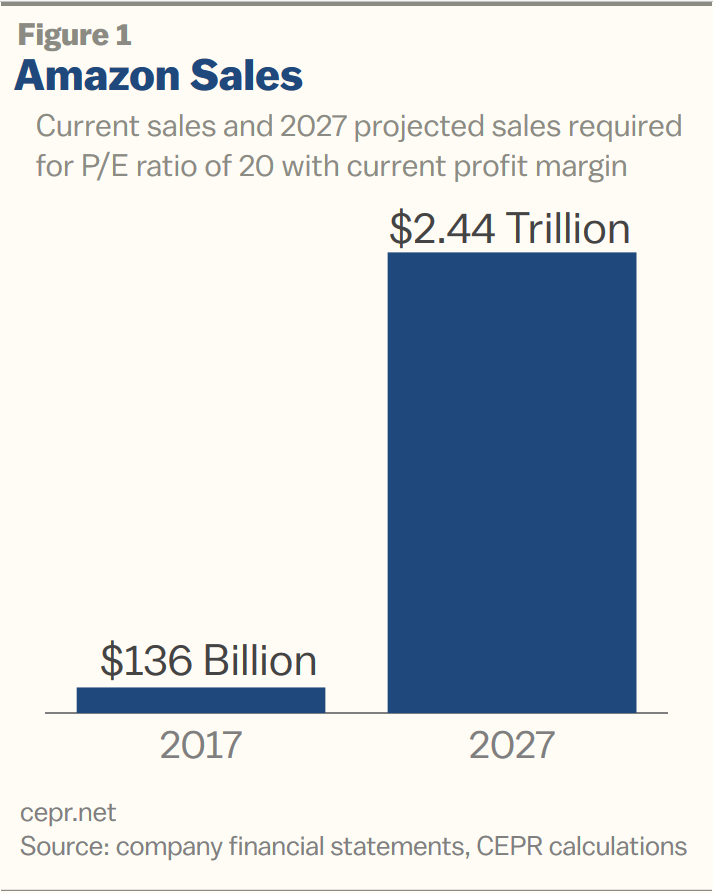 This implies that in 2027, Amazon’s annual sales will be just a bit less than 10 percent of GDP. Since much of GDP involves areas like health care, rent, and education, areas in which Amazon does not currently have a presence, it would have to be an incredibly dominant actor in the segments of the market where it does operate. 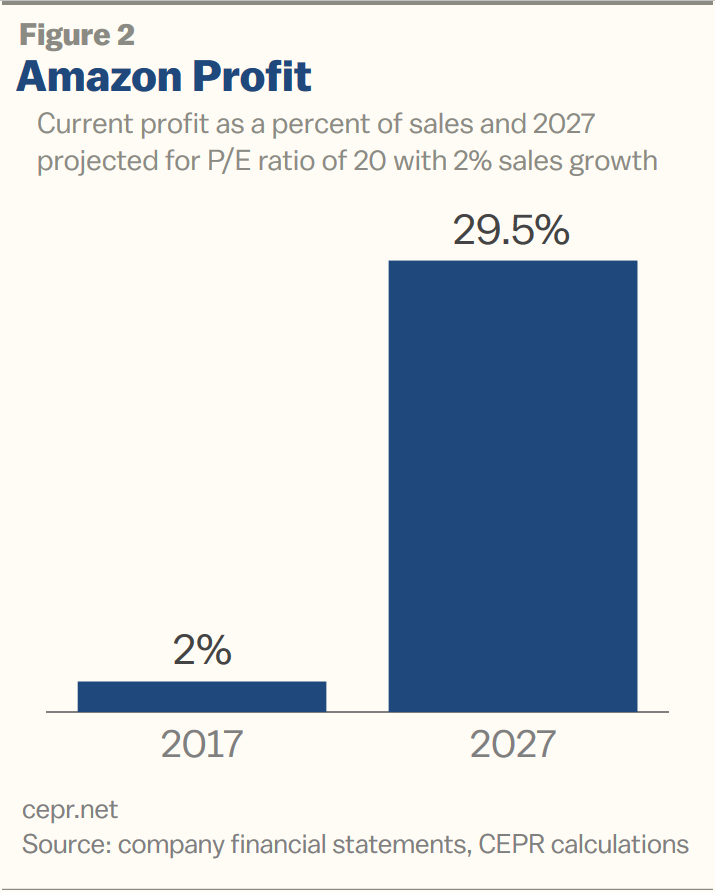 If Amazon were to hike its prices enough to achieve these margins it certainly would imply a very different shopping experience for its customers.

Of course, there can be some mix between these two paths, but it seems unlikely that Amazon would be able to substantially increase its market share even as it is pushing up its profit margins.

Amazon’s main source of profits in the last few years has been its web service division. While this division accounts for just 9.0 percent of the company’s revenue, it accounts for almost 75 percent of its profits. While it is possible that this division will continue to expand rapidly like the rest of the company, it is also possible that it will face serious constraints going forward.

Amazon was able to get a huge head start in this market, jumping in ahead of other tech giants like Apple, Google, and Microsoft. Now these companies are all making big pushes into this market. Let’s imagine as one possibility that competition from these companies leaves Amazon’s profits on its web service division unchanged in real terms over the next decade. This could mean that it either is forced to reduce margins substantially to maintain its share or it surrenders much of its share to its rivals, but keeps its margin in web services.

Either way, this assumption would imply that the company must generate $46.6 billion in profits from its non-web services. Excluding web services, Amazon’s current profits are equal to just 0.6 percent of sales. If the company is to generate $46.6 billion in profits in 2027 from its non-web services and keep its profit margins constant, then it will need sales of more than $7.4 trillion in 2027 (in 2017 dollars). This is shown in Figure 3 below. 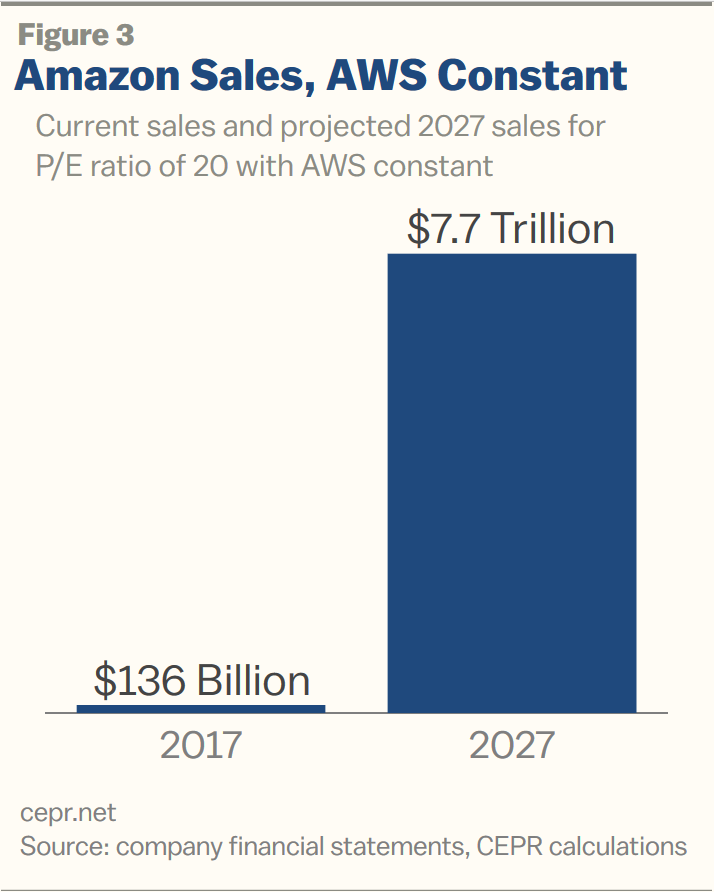 In this scenario Amazon’s 2027 non-AWS revenue would be roughly equal to 30 percent of US GDP.

The other extreme case is that sales just grow 2.0 percent a year and Amazon gets its $46.6 billion in non-AWS profits by increasing its profit margin. This scenario is only slightly different than the one shown in Figure 2 above, although the profit share on non-AWS sales would now have to be 30.4 percent instead of 29.5 percent. This is shown in Figure 4. 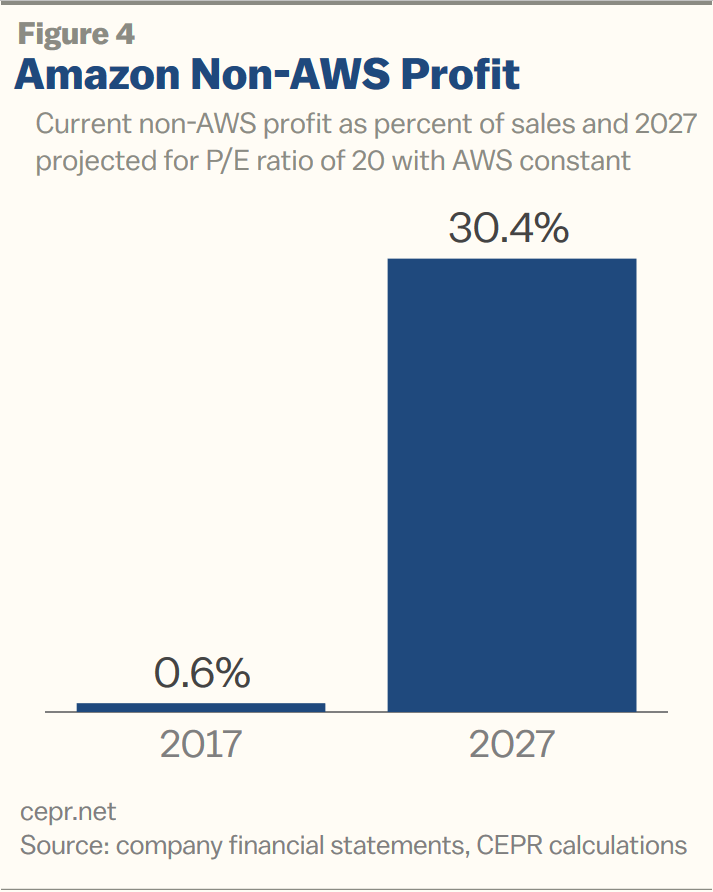 Here we can also envision a mix of rising margins and rising sales, but it is difficult to see how this will get Amazon to $46.6 billion in profits on its non-AWS sales.

Amazon has revolutionized the retail market and had an especially large impact in areas like publishing and now television. But that doesn’t mean that its stock is necessarily a good buy. There are of course other factors that could make the picture somewhat better than these numbers indicate, most importantly its profit from the rest of the world, but it’s not clear that would hugely change the picture.

In Europe, Amazon is looking at a slow growing economy and a difficult regulatory environment. China is growing much more rapidly, but it is has very strong domestic competition, which the government is likely to favor in regulatory disputes.  Other developing countries may offer better prospects, but it would take some very optimistic outcomes in these markets to hugely improve the picture.

It may seem strange that sophisticated investors would have hundreds of billions of dollars in a hugely over-valued stock, but we have seen this before. After all, the shareholders of Time-Warner ended up selling one of the largest media companies in the world for almost nothing when they agreed to be taken over by AOL.com. The value of AOL.com stock quickly collapsed, and the value of the combined company was almost entirely based on Time-Warner’s value.

And it was only a decade ago that all the Wall Street geniuses thought that house prices could never fall. The mortgage backed securities that fueled the housing bubble all carried high investment grade ratings, as did Lehman and AIG.

In short, any forecast on Amazon’s future profitability has a huge element of uncertainty, but we should never rule out the possibility that its current investors are clueless.