The change in the Asian gender pay gap has remained close to flat since 2017, when Asian women earned 77 percent of Asian men’s earnings (Figure 1). However, there were substantial variations within Asian subgroups. While some Asian subgroups experienced an improvement in the pay gap between women and men in their ethnic groups (Burmese, Laotian, Filipino, Hmong, Pakistani, Korean, Indonesian, Vietnamese, Thai, and Taiwanese), others experienced a widening pay gap (Bangladeshi, Cambodian, Chinese, Nepalese, Indian, Japanese, and Sri Lankan). Overall, Asian women consistently made less than Asian men across most ethnic groups, except for Burmese (103.3 percent higher earnings) and Laotians (about the same).

Most Asian women also made significantly less than white men, except for Taiwanese and Indian women, who made close to 120 percent of white men’s earnings in 2018. Women in some ethnic groups, such as Nepalese and Burmese, made closer to 50 percent of what white men made in 2018. This, again, reiterates the diverse nature of Asian ethnic groups that needs to be taken into account in any discussions involving working Asians. Chinese, excluding Taiwanese, were the only ethnic group where the pay of women achieved parity with the pay of white men. 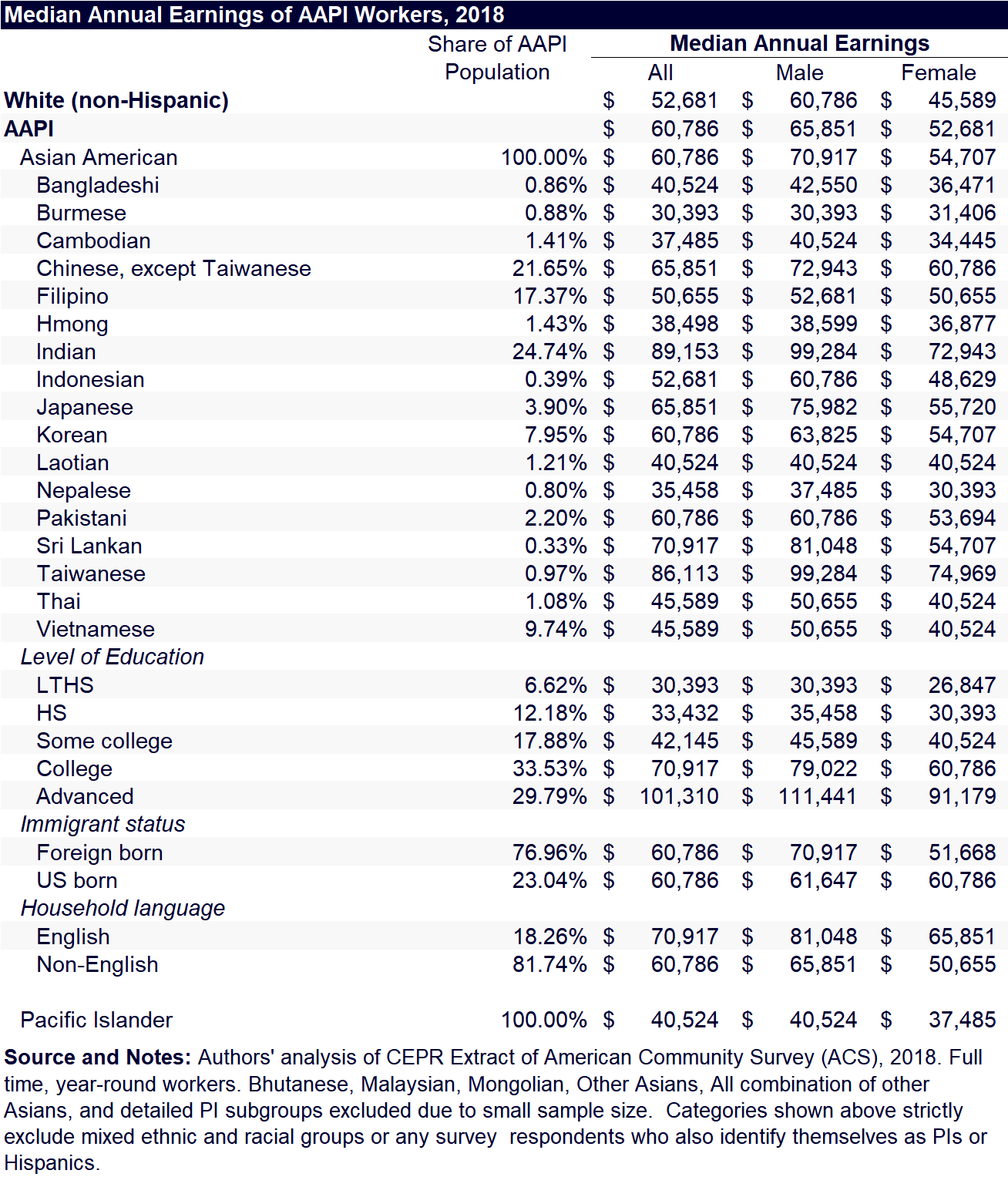 Asians residing in the United States also vary widely in their immigration or citizenship status. Seventy-seven percent of Asians were born outside of the US in 2018, which is significantly higher than 54.3 percent of Hispanics and 4.3 percent of whites born elsewhere. Out of those who were born outside of the US, 61.9 percent were naturalized citizens. Table 1 shows that Asian women born outside of the US made, on average, $51,668 in 2018, as opposed to $60,786 for those who were born in the US. The gender pay gap was small for Asians born in the US, whereas the gap was much wider for those who were foreign-born (foreign-born women made 72.9 percent of what foreign-born men made). The gap was also much wider for Asians in households that use non-English as the main language, as opposed to households that use English.

These differences are worth noting when aiming to close the gender pay gap for the Asian population residing in the US. The pay gap for Asians stems from the diversity of cultures, languages, immigrant statuses, and levels of education, not just in comparison to other racial groups, but also among the different Asian ethnic groups. Any policy prescriptions to help achieve gender pay parity for this set of workers needs a deeper dive into each ethnic group, with a better understanding of their cultural, economic, and political backgrounds.

* While many definitions of Asian exist, these numbers strictly exclude those with who are mixed with non-Asian races and/or have Hispanic or Latino backgrounds. When Asian includes those who have indicated having a Hispanic or Latino background, the gender pay gap declines slightly, with Asian women making 78.3 percent of what Asian men make. When Pacific Islander includes those with a Hispanic background, PI women made 90 percent of what PI men made in 2018.