Comparative Carnage: Homicides and the Pandemic

Donald Trump has repeatedly complained about the crime in major U.S. cities. In fact, he just now decided that it would be clever to send U.S. law enforcement officers to major cities in swing states (Milwaukee, Detroit, and Cleveland), ostensibly because of the high crime there.

While he has been obsessed with talking about crime in cities with large minority populations, Trump has apparently not been paying much attention to the number of people dying from the pandemic (1,485 yesterday). In fact, far more people have died from the coronavirus than from homicides. 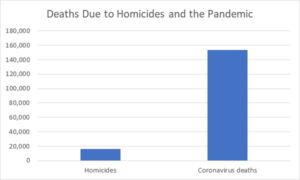 Patent Monopolies and Inequality: When We Give Rich People Money, Why Does Inequality Surprise Us?

Does the New York Times Prohibit Its Reporters from Mentioning China’s Vaccines?