Some Good News in Coronavirus Times: A Rise in the Labor Share of National Income

I would have blogged on this last week if not for the small distraction of a pandemic. Anyhow, we now have full year data on profits and income, and it turns out there was an increase in the labor share of roughly 0.7 percentage points in 2019. That took us to 64.2 percent of national income. That is still down from 66.2 percent in 2000 and 66.9 percent in 1979, before the period of upward redistribution began, but it is up from a low of 61.7 percent in 2014. 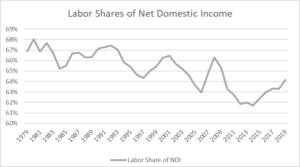 This means that we were seeing workers gain back some of the income share that they lost in the Great Recession, and to a lesser extent before that. Of course, it would have taken several more years to get back to the former labor shares. If we assume a gain of 0.7 pp a year, we could have back to the 2000 share in another three years or the 1979 share in four years.

However, with the economic collapse we are now seeing, all bets on wage and profit shares are off. It is very hard to know how the pie will be divided up when this over, clearly the policies we pursue now will make a big difference.

It is worth noting that the shift from wages to profits has not been the major cause of wage stagnation for the typical worker over the last four decades. If we were back at the 1979 wage share, and distribution of wages was unchanged, the pay of the median worker would be 4.2 percent higher. That is not trivial, but that is only around 10 percent of the gap between productivity growth and wage growth over this period. Most of the upward redistribution went to CEOs, Wall Street types, and other high end workers.

The Washington Post Wants to Cut Social Security and Medicare (yeah, what else is new?)

The November Jobs Report Was Not as Strong as Advertised