• ARTICLE Latin America and the CaribbeanVenezuelaWorld The Americas Blog

I have sometimes noted that in the current “four legs good, two legs bad” discourse about Venezuela, journalists can write almost anything about the country and no one will question it – so long as it is something negative.  On Saturday, March 13, the Wall Street Journal published this chart on its front page in the print edition, below, and claimed health care spending as a percent of economic output was “lower in Venezuela than in all other major economies in Latin America.” The chart shows Venezuela’s health care spending at 1.6 percent of GDP. 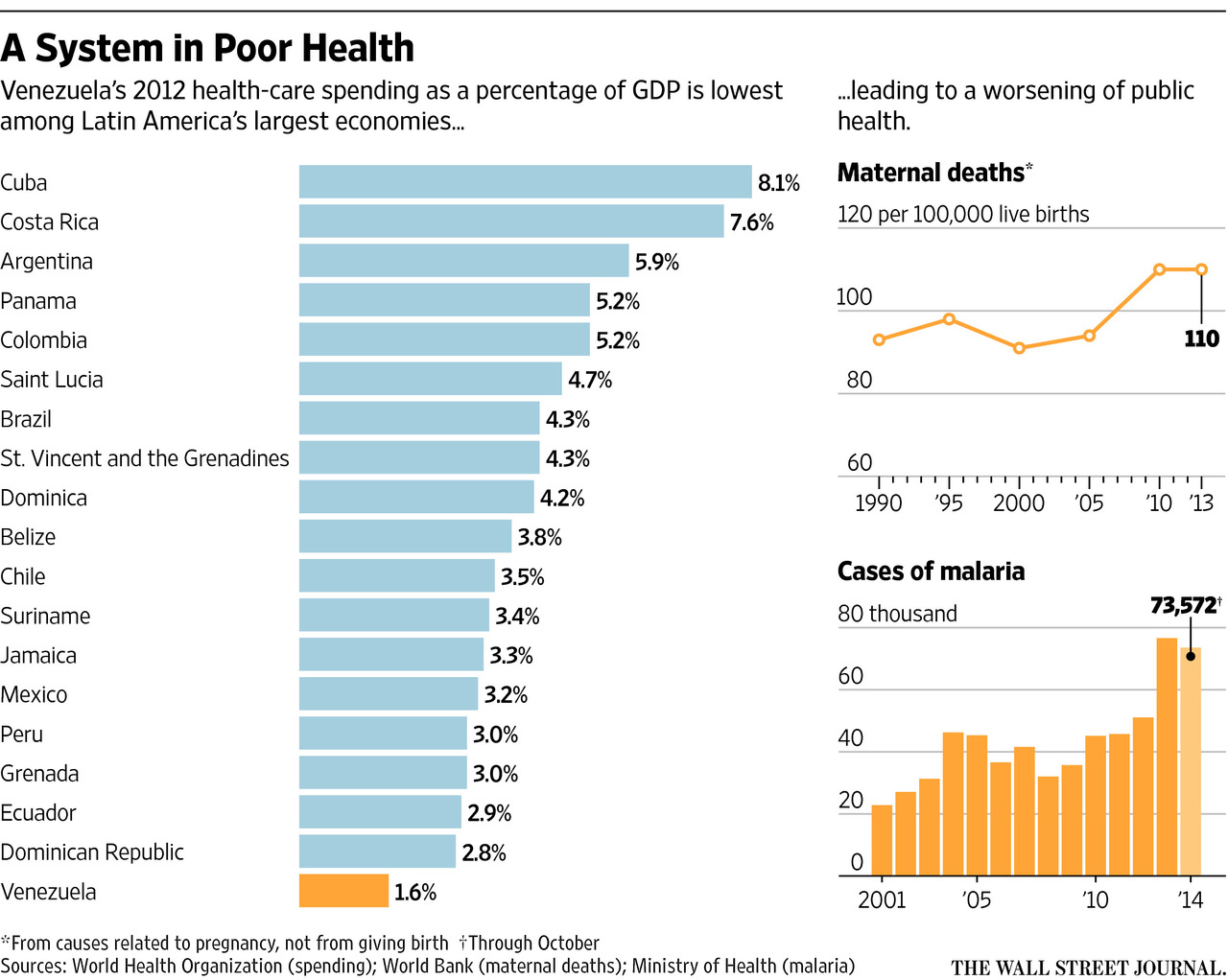 The chart and text don’t say it, but they are referring to public (i.e., government) spending on health care, which one can find by looking at the original data from the World Health Organization.  When I read this, I thought, this can’t be true:  The Venezuelan government spends about the same percentage of GDP on health care as Haiti? The lowest of 19 countries in the hemisphere? Less than some of the poorer countries in Sub-Saharan Africa? And these numbers are for 2012, when the economy was booming (5.7 percent real GDP growth), Venezuelan oil was at 103 dollars per barrel, and the government built more than 200,000 homes. They had no money for health care?

This should have set off some alarm bells at the WSJ, if any editors were paying attention. This number is not plausible because it is wrong.  When the government of Hugo Chávez in Venezuela decided to make health care a priority after getting control over the national oil industry in 2003, it was unable to accomplish very much by going through the health ministry and the public hospitals – running into various bureaucratic and political obstacles. So it created Misión Barrio Adentro, a system of health clinics that served people in both urban and rural areas where many did not previously have access to health care.

The short story is that the numbers used by the WSJ apparently didn’t include most of Venezuela’s health care spending, since it has gone through the misiones. In 2012, the national oil company contributed $5.5 billion for Misión Barrio Adentro.  Also, the government of Venezuela has an actual agreement with Cuba, which provides specifically for the supply medical care through Misión Barrio Adentro in exchange for 98,000 barrels of oil per day, which Venezuela has provided. The value of that oil in 2012 was $3.44 billion. The medical services include not only 40,000 doctors but also medical equipment, medicines, and other health care services.

If we add in these expenses, and use the IMF’s 2012 exchange rate to convert to domestic currency, this adds another 3 percent of GDP to the government’s health care spending.

(Note: the WSJ article also claims that “the share of state spending on health, at 6%” was also “lower in Venezuela than in all other major economies in Latin America.” This is also false, for the same reasons discussed above.)

From a Broken Economy to a People’s Economy

How Has Bolivia’s de Facto Regime Taken Advantage of COVID-19 to Consolidate Its Power and Repress Political Rivals?