This is the sixth in a series of blog posts addressing a report by Diego Escobari and Gary Hoover covering the 2019 presidential election in Bolivia. Their conclusions do not hold up to scrutiny, as we observe in our report Nickels Before Dimes. Here, we expand upon various claims and conclusions that Escobari and Hoover make in their paper. Links to past posts: part one, part two, part three, part four, part five, and part seven.

In the previous post, we observed that the polling stations included in the TSE announcement were not representative of the election, and so the important questions are: what were the causes of the unrepresentativeness, and how does this impact the late results? We had previously shown that even having no knowledge of the factors leading to the counting of nickels before dimes, we may forecast a Morales victory in the first round.

Before we proceed, there is an unfortunate aspect of Escobari and Hoover’s analysis we must address: they calculate party vote shares in a nonsensical manner. While this does not have a large effect on their estimates, it often does matter to their discussion of results.

We have immediate grounds for suspicion upon examining their reporting of “Difference Model” results[1]. The number of observations (polling stations) in the analysis is 34,529, so 26 polling stations are absent. This is because Escobari and Hoover examine the party votes (or differences) as a share of “Válidos En Acta”. In the TSE logs, Válidos En Acta represent the official transcription of the valid vote total as recorded on the acta. Ideally, the “Votos Válidos” entry on the acta accurately reflects the total number of valid votes cast in total for all parties (that is, excluding blanks and nulls). In practice, however, jurors often reported an incorrect number in that space on the acta. Sometimes jurors made arithmetic mistakes; sometimes jurors included blank and null votes in the total.

Detail from Image of Acta 90383: Inclusion of blank and null votes in Válidos: 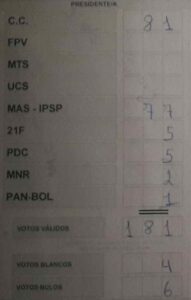 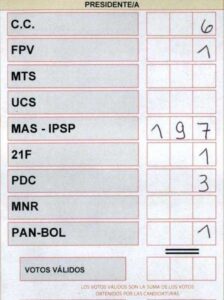 Sometimes, the jurors left what appears to be the correct sum, but observaciones on the acta were seemingly unaccounted for in the official count. 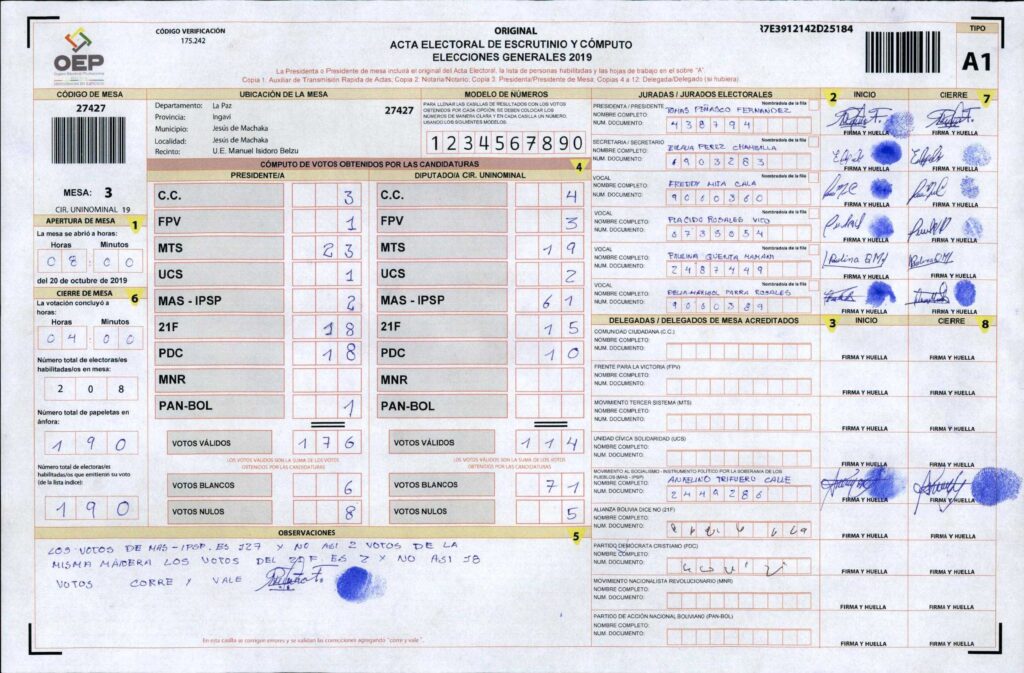 In this case, the TSE recognized only 67 valid votes even though the signed observation indicates 127 valid votes just for Morales. One-hundred-seventy-six valid votes, as indicated En Acta, would be the correct sum if the observations had been taken into account.[2]

The important thing to recognize is that the space is included to assist the jurors in checking their work, rather than a legal count of the valid votes. Unfortunately, jurors did not always carefully follow the instructions, either failing to notice or simply failing to repair the discrepancy by making an observación. Where there remained a discrepancy between the written valid votes and the total votes listed for each party, it fell to the corresponding TED to officially reconcile the two in the official count, using the supplementary election materials provided by the jurors.

Often, the discrepancies were resolved only implicitly. Regardless, the legal basis for deciding the election is the sum of the officially recognized party votes. There were 6,137,671 valid votes recognized in the official results, but the total Válidos En Acta came to 6,137,778. In the end, Válidos En Acta were reported as zero at 26 polling stations, yet 22 of these stations reported valid votes for at least one party.[3]

Given the inconsistent reporting, there is no justification for using the Válidos En Acta in place of the official valid votes. Indeed, while the overall difference is small, it generates absurd results for individual actas. In one case, the Válidos En Acta was transcribed incorrectly as “109” instead of “189,” making it appear to Escobari and Hoover that Morales won 153 percent of the vote. In the official results, the TSE recognized a total of 189 valid party votes for president recorded on the acta. Though the “8” appears to be written a little funny, it looks, if anything, like this was an erroneous entry of “199” that was corrected to “189.” If so, it might have been more clear to make an observation rather than complete the “8” out of the “9,” but in the context of the acta, “189” is clearly correct. Escobari and Hoover even erroneously cite this acta as one of seven “where MAS votes exceed the total number of valid votes,” when they mean “where MAS votes exceed the transcription of the entry.”

Detail from TREP Image for Acta 1579

In sum, the check on the acta is not the legal basis for determining the margin of victory, and leads to nonsense results, even casting unwarranted suspicion on the election. And although Escobari and Hoover used Válidos En Acta in computing party vote shares on individual actas, they acknowledged in Table 1 that there were 6,137,671 valid votes: the actual total.

In the next post, we finally begin to examine the statistical arguments offered by Escobari and Hoover in pointing to fraud as an explanation. Uniformly, the arguments fail to account fully for the problem of nickels before dimes, and therefore falsely attribute differences between early and late polling stations to fraud.

[2] The most simple explanation for the irregular reporting at this station is that the recording of the vote tally for MAS was put off to the end but the juror recording the results failed to skip the line, recording “2” votes for MAS that belonged to 21F and “18” votes for 21F that belonged to PDC. As per instructions, the necessary corrections were made in the section for observaciones. The TED in La Paz apparently overlooked or rejected the observations, turning a net gain of 124 votes for Morales into a net loss of 1 vote. (Morales won overwhelmingly at the three other polling stations in the precinct, by a margin of 68 percentage points.)

[3] The results at the other four polling stations were effectively annulled. Strictly speaking, annulled results trigger a revote at the corresponding polling stations, but it was generally agreed that the result of the election would not be affected by a revote. The actas were restored, but the results zeroed out. A revote might have reduced Morales’s final margin from 10.565 percentage points to something close to 10.563.