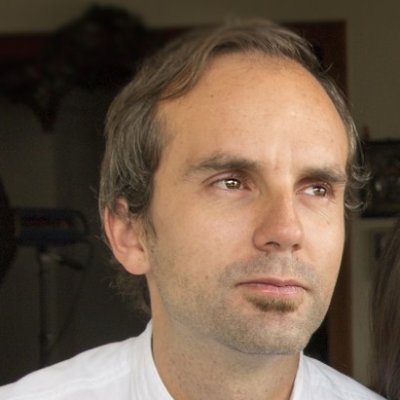 While IMF operational finances may have depended heavily on surcharge income in the past, as a result of the pandemic and its associated economic impacts, IMF lending is projected to swell over the next few years, and the Fund’s net earnings will remain positive even if surcharges are fully removed. The IMF will not face yearly losses anytime soon. This should give the IMF Executive Board peace of mind if they heed the advice of economists and development organizations and move to terminate surcharge policy.

The IMF plays a central role in the global economy, but many economists don’t have a full picture of the Fund’s finances. Apart from its principal function of providing balance of payments support to sovereign nations, there often isn’t a clear understanding of what type of institution it is. Is it a deposit-taking entity like the Bank of International Settlements? Or is it more like an investment bank with governments as shareholders, like the Latin American Development Bank — CAF? While it is not really a bank, the General Department of the IMF has the basic structure of one; it has a balance sheet, it seeks to generate positive yearly returns and increase its capital reserves, ostensibly “to manage financial risk.” In order to do this, it needs to generate income, and the IMF’s income comes from three sources: regular lending income, surcharge income, and investment income. The IMF’s expenses mostly consist of operational costs (such as salaries and pension payments). Table 1 shows a breakdown of the IMF’s operational income statement, from its latest quarterly financial report.

When the IMF has positive net earnings, they are retained and added to its “precautionary balances,” the Fund’s “general and special reserves.” These balances are currently at $27.9 billion. While the IMF Executive Board has an established floor of $20.1 billion (SDR 15 billion) for its precautionary balances, it also has a defined target, which was increased to $33.5 billion (SDR 25 billion) in late 2020 — this target was ratified by the IMF Board in late 2021. The IMF’s precautionary balances are supposed to be a buffer in case borrowers do not pay back their loans, and for other financial risks such as “pension revaluations,” which is how the IMF refers to the changes in the value of its pension fund assets mandated under the Fund’s accounting standards.

Surcharges are paid by General Resources Account (GRA) borrowers with outstanding debts over 187.5 percent of their quotas. GRA loans are non-concessional IMF loans. It has been argued that surcharges mainly help build up the Fund’s reserves, and surcharge income has represented a sizable portion of the IMF’s yearly operational income. This may represent a case of what economists call “incentive incompatibility” (1:03:47), as the IMF’s incentives to raise more revenue will push countries into larger surcharge-paying loans. In the nine months that ended on January 31, 2022, surcharges represented 67 percent of net operational income. However, if the IMF had not generated surcharge income during this period, it still would have reported positive net earnings.

The twenty-first century began with very few countries requiring IMF loans. The IMF’s 2006 annual report noted that “some major borrowers were able to repay the Fund early” and the IMF approved budget cuts and commissioned a Committee of Eminent Persons report “to identify and assess the full range of income-generating options available and to make specific recommendations for one or more income models that would generate sustainable long-term financing of the Fund’s running costs.” However, after the Great Recession, the IMF expanded its lending. The European debt crisis saw the IMF make a small number of very large loans that required the payment of significant surcharges. In financial years 2014, 2016, and 2018, the Fund’s net income was very dependent on surcharges. In 2016, had it not been for surcharges, the IMF would have reported an annual loss (see graph below). 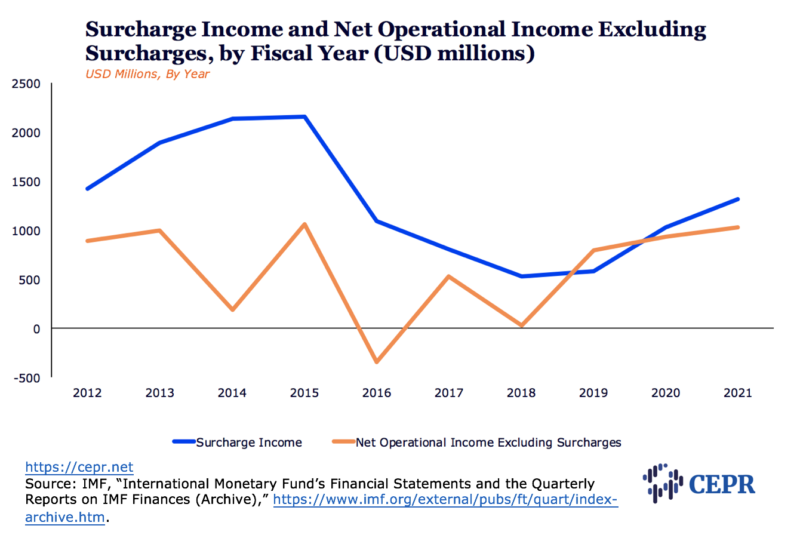 Since the onset of the pandemic, the IMF has extended small surcharge-free loans to dozens of countries. However, absent bold debt relief and major changes to the international financial architecture, post-pandemic fiscal and balance of payments problems will ensue, and the IMF projects a significant increase in lending. This will include many new regular GRA loans and large surcharge-ridden loans for countries in severe distress. As of April 2022, 53 countries were in debt to the IMF. Under a scenario based on the IMF’s World Economic Outlook (WEO) — its flagship report and database of economic projections — the Fund expects that number to jump from 53 to 68 countries by April 2023. The scenario also projects that countries paying surcharges will increase significantly, from 16 in April 2022 to 38 by April 2024.

This significant increase in lending, according to the Fund’s own projections, means it will continue to have positive net operational income that will help it continue to build up its precautionary balances every year, even without any surcharge income.

The top half of Table 2 shows the original IMF projections with two scenarios: the desk survey (an expert-based assessment from IMF staff), and a WEO model (a mathematical model that takes into account fiscal and balance of payments forecasts and determines the likelihood of entering into an IMF loan program). The bottom half of Table 2 shows both scenarios if surcharges income is removed.

Furthermore, the Fund still has $156 billion worth of gold (at $1,725 per ounce) that, astonishingly, is still recorded and valued at 1960s prices (1 SDR per ounce), as seen in the IMF’s latest annual financial statements, below. 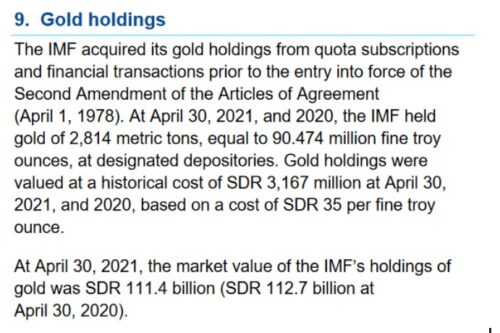 If only 3.7 percent of that gold were valued at present day market prices, and the revaluation not diverted from the GRA, the target for precautionary balances would be reached immediately. This does not even imply selling the gold — which could entail legal issues — but merely deciding that the IMF should follow its own “prevailing market-price” accounting principles for a small fraction of its monetary gold.

It is clear therefore that surcharges are not needed to reach the precautionary balances target.

If the Fund is concerned about the need to continue growing precautionary balances beyond the set target, the gold revaluation practice can be made recurrent. For example, the maximum projected yearly surcharge income ($2.86 billion) contribution to precautionary balances — under the WEO model scenario — can be replaced with a yearly mark-to-market updating of the equivalent of 1.9 percent of the Fund’s current gold holdings.

Beyond the impact on the Fund’s operational income and finances, recent papers and publications have shown that surcharges are counterproductive and harmful. US legislators, academics, civil society organizations, and developing countries have called for an end to the IMF’s surcharge policy.

There are viable alternatives for strengthening the Fund’s capital reserves that do not require surcharges. Without surcharges, the IMF’s precautionary balances will keep growing, albeit more slowly. Even without any surcharge income, the IMF’s own projections do not expect any net operational losses. Surcharges can be removed safely without threatening the sustainability of the IMF’s finances, while helping reduce debt payments for many developing countries, thereby helping to save and improve the lives of people around the world.