Paper from IMF Shows That Recovery Is Far from Complete

Researchers at the International Monetary Fund (IMF) released a paper earlier this year on the decrease in labor force participation since 2007. They conclude that although structural components have played a role in the decline, there is a large cyclical component present as well, meaning that labor force participation can still recover significantly without risking accelerating inflation. While we can quibble with some of their exact numbers—they argue that up to 43 percent of the drop in participation rates between 2007 and 2013 can be attributed to cyclical effects, while I’d argue that it’s a bit higher—their more general findings are surely correct. 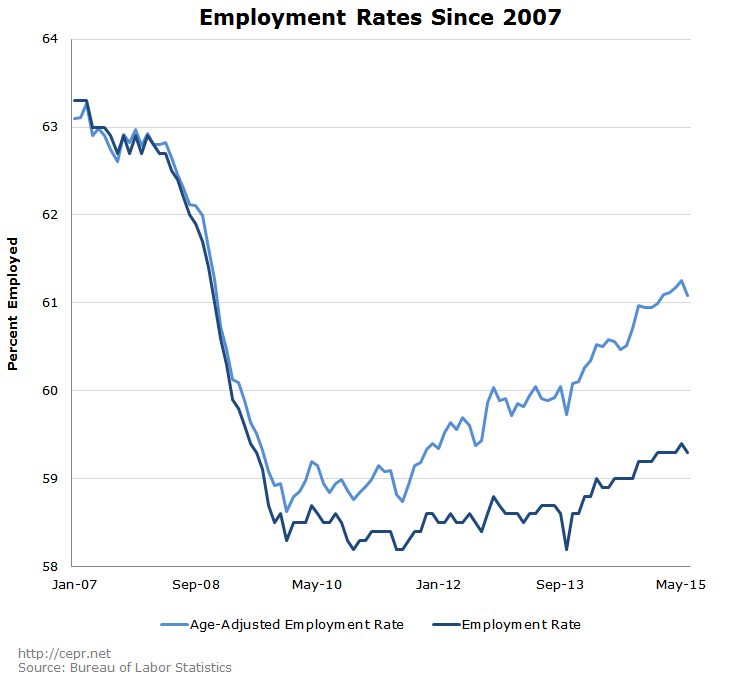 Our age-adjusted measure was 61.09 percent in June 2015; while this is significantly better than 59.3 percent, it’s still well short of 63.0 percent. Moreover, over half of the 3.7 percentage-point decline in employment since 2007 appears cyclical, given that our age-adjusted measure is down 1.91 percentage points. This indicates that despite the aging of the population, the economy is still far from full recovery.

Furthermore, the labor market was likely operating below full employment even in 2007. That year the prime-age employment rate was 79.9 percent, far lower than the 81.5 percent rate from 2000. Policymakers should therefore be operating under the assumption that, regardless of changing demographics, today’s labor market is operating well below capacity. Policies aimed at increasing labor force participation and employment are therefore warranted.

China is the World’s Largest Economy: Get Over It

Special Drawing Rights One Year Later, By the Numbers